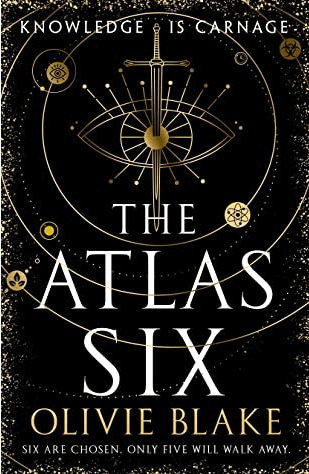 Our April book club read was The Atlas Six by Olivie Blake.

We started a book club with a few friends in the fall of 2021 for a once-per-month book discussion. We don’t always agree, and we don’t always end up loving the books we choose, and we don’t always spend a lot of time talking about the assigned book. But, maybe even more importantly, we laugh a lot, and it’s a bright spot of camaraderie each month.

We’re starting a new series of posts this year where we recap our thoughts on the monthly book following each meeting.

Amy
I was excited about this month’s read because ensemble stories can be really fun, and this one was really good. I enjoyed all of the narrators (even though I KNOW I know one of their voices from another book I listened to and it’s been driving me bananas that I can’t figure out which book it was!) and it also helped keep some of the characters straight. Holy cow – there are a lot of characters.

While there isn’t a lot of action in this book, there’s a LOT of plot and it kept me interested and intrigued the entire way through. There was a “I did NOT see THAT coming” moment and a super interesting story line that introduces where book 2 is going to go. While this wasn’t a 5-star read for me, it was interesting enough that I’ll definitely stick around for book 2 because I want to know what happens.

I enjoyed this read and in particular the author’s ability to differentiate and grow such a large cast of characters. But that growth and development meant that the plot stalled in some ways. The pace didn’t bother me, but it felt like it took a very long time to get to the ultimate place the plot was headed. I am certainly in for the next installment. And I think that it has the potential to get excellent given that we now can stand on the strong character foundation the author has already built. This series has a lot of potential.

I agreed with the majority on this one. It’s an interesting story, but was slow-paced due to not having much action. Primarily, this first book (of what we understand is planned as a trilogy?) gave us a good foundation on the characters, but there were so MANY people that it took a lot of internal monologuing and narration to get us where we needed to be by the end. I was hoping for more magical duels and such.

I’m always frustrated by books where the characters won’t talk to each other (like, so many problems could be solved if we’d all just work together!), but there were good reasons for it in this one. For example, readers could have guessed what was meant by “elimination” early on (particularly given the book summary and tagline), but some of the characters didn’t know until later. However, the book ended with a bang and I’m interested to read the second one when it’s released.

P.S. Like Amy, I also listened to the audiobook and felt the readers did an excellent job.

Have you read The Atlas Six? We’d love to hear your thoughts in the comments! Or, let us know whether you think you’ll try it based on our review.

P.S. If you’d like to follow along with our book club reads, stay tuned for the Thursday post where we’ll reveal our TBR selection for May book club!