Most bookish folks can name the book that stayed with them from childhood, the book they read so many times that the passages always felt familiar, the book that became a friend. For me, it was Charlotte’s Web by E.B. White. I would finish the last page, and flip back to the first to start again.

All that reading had a lasting impact on me. The things I learned from Wilbur, Charlotte, and Fern are still with me today. So many aspects of my life now make sense when discussed in light of the talking barnyard animals and spider. Here is a list of some of the life lessons I took from my favorite childhood novel:

1. Always fight injustice when you see it.

In the book’s opening pages, Fern saves Wilbur, the runty pig, from her farmer father’s axe. Her father argued that his small size would mean he would be sickly, but Fern pleaded with him to keep and raise the pig herself. And, she won! Wilbur lived to see another day because Fern fought for the tiny pig. This little interaction taught me to always raise my voice, even against things that are ingrained in tradition, even against those I love. Raising your voice against injustice, no matter how small your voice feels, is always important.

2. People will believe anything in print.

Starting with Zuckerman, everyone in the book believed the wonderful things Charlotte wrote about Wilbur in the web. He was “some pig” and “terrific” despite beginning his life as the runt. They even entered Wilbur in the county fair. The Zuckermans believed Wilbur was special because Charlotte wrote that he was. Words written, true or not, gain traction. “Trust me, Wilbur. People are very gullible. They’ll believe anything they see in print.”

Wilbur starts the book devoted to Fern, his friend and caretaker. But over time, although Wilbur’s devotion to Fern never waivers, Fern grows up and her visits become less and less frequent. Friends sometimes grow apart. But those friends are still important and those friendships still have meaning. And when we do get to revisit them, it is often like no time has passed. Friendships often change as our lives change.

4. Always play to your strengths.

One of my favorite scenes in the book involves Wilbur tying string to his tail and attempting to spin a web. Charlotte warns him that he lacks spinnerets and lacks the know-how to perform this difficult task. But Wilbur tries anyway. And of course, fails in epic fashion. We all have strengths and unique talents. Rather than try to copy someone else’s talent, we should be mindful to play to our strengths. Don’t try to spin a web if you aren’t a spider.

5. Death is an inevitable part of life.

Death looms throughout this entire novel. First, Wilbur’s. And then, Charlotte’s. Charlotte teaches Wilbur that her death is simply part of life. It is an eventuality that we cannot escape. “After all,” Charlotte tells Wilbur, “what is life, anyway? We’re born, we live a little while, we die.” Heavy stuff for a children’s novel, but part of what makes a great children’s novel is the ability to distill complex adult themes so that young audiences can understand them. 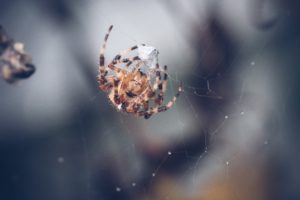 Wilbur starts out trepidatious about befriending a spider. She looks mean. She catches bugs and eats them. I mean, she drinks blood. Ewwww. But over time, Wilbur starts to believe that Charlotte is beautiful. As their friendship grows, Wilbur realizes that he had misjudged her. “In good time, he was to discover that he was mistaken about Charlotte. Underneath her rather bold and cruel exterior, she had a kind heart, and was to prove loyal and true to the very end.” First impressions aren’t always right, and our view of people will change as we get to know them.

7. People change when someone believes in them.

Wilbur starts out as a sad and depressed little piglet, but by the end of the novel he holds his head high and knows he has worth. This change comes because Charlotte believed in him, and taught him that he was worth fighting for. “Ever since the spider had befriended him, he had done his best to live up to his reputation…Now that the web said RADIANT, he did everything possible to make himself glow.” When we believe in people, they often start believing in themselves as well.

8. Helping others makes us better.

Charlotte helps Wilbur without question, simply because she wants to. And throughout the book, Wilbur wonders why. She explains to him, “by helping you, perhaps I was trying to lift up my life a trifle. Heaven knows anyone’s life can stand a little of that.”

Although Charlotte spun the webs for Wilbur, all of the barnyard animals helped with the plan in their own ways. They offered up suggestions for the web’s text. Without Templeton’s help, Charlotte may have run out of words to spin. Even those with skill must rely on others sometimes.

10. Friendship is one of the most important parts of life.

Charlotte and Wilbur have one of the most beautiful friendships in all of literature. Yes, I mean that. They listen to each other, they defend each other. And Charlotte stays devoted to Wilbur all her life. This aspect of the novel is, I believe, what has made it such an enduring and endearing story. And this is the central lesson that impacted me as a young reader. My friendships are an important part of my life, and I strive to maintain them. Charlotte and Wilbur taught me what friendship means, and how to be a great friend. “You have been my friend. That in itself is a tremendous thing.”

So, bookish friends: what book helped shape you? What book did you read countless times? What did it teach you?

Photos of spider by Katie Gempel