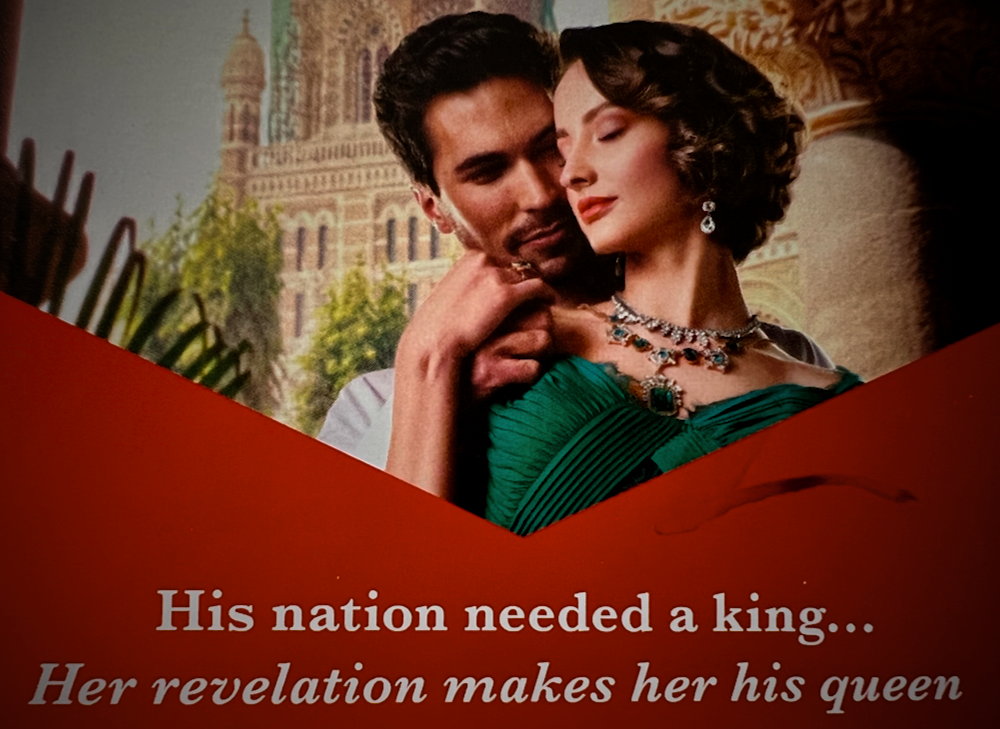 At our December book club, in celebration of the holidays, we exchanged cheesy romance novels. (This was Aubrie’s delightful idea!)

The only instruction was that they be fantastically cheesy, and the crew did not disappoint.

I received (also c/o Aubrie) a ‘Harlequin presents’ book called Desert King’s Surprise Love-Child. Why was he so surprised? You’ll have to read it to find out! (Just kidding. The blurb on the back basically gives the whole story away.) It was a very quick read, and it was exactly as cheesy as expected, although it did drag on a bit telling us the same information over and over again. This is the kind of book some people think of when they think ‘romance’ — uncomplicated, no stakes, very little character development. Just a light diversion.

(This conversation probably deserves a full post at some future time, but I want to be clear that there are plenty of well written, complex stories that would fall into the romance genre; thus it’s a mistake to write off all books of the genre as if they have little to offer.)

This post is not really meant to be a review of the book. You now have the background you need to understand that it’s a slapdash, pulp story and the writer clearly didn’t put a ton of thought into it.

The point I’m working towards is that sometimes a thesaurus is a bad idea.

You may have heard this from an English teacher at school if you were one of the kids who did a find-and-replace to give your writing more variety. As you know, each word has its own meaning, and those shades of meaning can make all the difference.

For example, also at book club, it came up that the MC of the book we’d been reading was pusillanimous (thanks Megan!). It means cowardly, and can be used almost interchangeably. However, in this case, pusillanimous was the better word because a plain old coward might be cowardly by running away, whereas our MC was cowardly by inaction, letting others lead him around and make decisions rather than taking charge. Pusillanimous was a good choice in this case as the shades of meaning actually made it a better fit than the more common word.

So now we come back to the Desert King, which essentially has no shades of meaning at all.

And in fact, the title itself is basically a find-and-replace error: throughout the story he is referred to as a prince. A king is not the same as a prince, though they are both male royalty. Yet it seemed perfectly acceptable to use king in the book title?

There are plenty of other great examples throughout the story. In the main explicit scene, the author describes, “…his bigness…”

It did not put me in a sexy frame of mind. Instead, it made me laugh so hard I almost fell off my chair. Bigness? That was the find-and-replace you came up with? I don’t think the author should have bothered with a euphemism on this one.

But my favorite example from the book was one of the many times the male MC was thinking about how his life had followed a different path than he intended, and how he couldn’t do what he really wanted to do. The sentence reads, “He’d known that going off-piste on that front could never be an option for him.”

For those not in the know, a piste (pronounced in a way that almost sounds like “pissed”) is the strip that fencers stand on as they fight back and forth during a fencing bout. If you go off of the piste, you get a penalty because you are supposed to stay on that strip.

She meant he couldn’t go off script. Or off path. Or off course. But she thesaurused a term that many of her readers probably won’t know, and that doesn’t even make sense for the character. (Does the prince know the term because he’s a fencer, or just a summer olympics enthusiast? It’s never mentioned any other time in the book, so that’s still a mystery.)

In this case, it would have been better to just pick one of the usual cliches that would make sense to the wider audience.

To recap: Not all romances are cheesy. Cheesy romances can be diverting and fun, though maybe not always in the way the author intended. And if you are thinking about grabbing a thesaurus, first decide whether it’s needed.

Do you have any great examples of a time a quick peruse through a thesaurus was a bad idea? Please share in the comments!

Bonus: ask me to tell you the “dirty” fencing joke that I thought was a bit too risqué for the blog post…