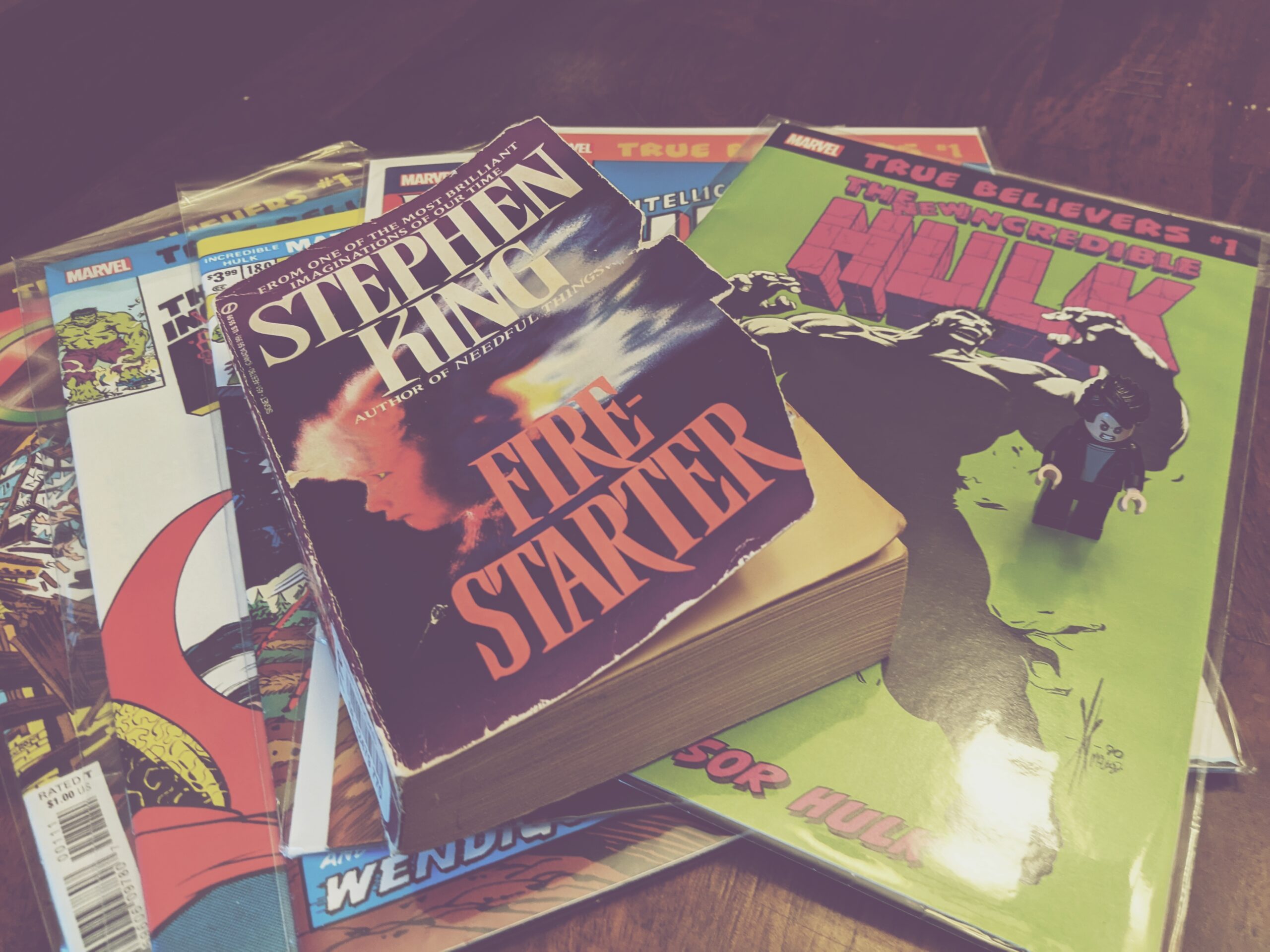 As a Stephen King fan, I have come to expect certain elements in his stories.

Memorable main characters that often have deep flaws. Masterful ratcheting tension that eventually explodes. One thing I did not expect when I reached into his back-catalogue recently was a super hero. But, that’s exactly what I got reading his 1980 novel Firestarter. Perhaps I’ve been consuming too much Marvel lately, but the entire time I read Firestarter, I could not help but think that the book had some dubious marketing. Charlie isn’t scary, Charlie is a super hero in the making.

Charlie’s parents were guinea pigs for a top-secret drug developed by a shady government organization, known only as The Shop. The drug caused unpredictable results, but the aim was to create and weaponize psychic abilities. Charlie’s parents, unwitting grad students at the time, survived the experiment but it left them with some mild (or not so mild) psychic abilities. Her dad had what he called “the push”—the ability to exact mind control over people— and her mom retained some telekinetic powers. But the drug changed their DNA, and as a result, Charlie’s abilities made her parents’ skills look quaint. Charlie could light things on fire with her mind, a skill that is especially terrifying when possessed by a toddler. And of course The Shop watched from the sidelines as little Charlie’s psychic talents developed, waiting for the day that they could capture her, experiment on her, and harness her powers for military domination.

Anyone familiar with the Marvel universe should see, based on that synopsis, why I think this is Stephen King writing a super hero origin story. There are shades of Captain America, The Incredible Hulk, The Scarlet Witch, and basically all of the X-Men in there. The government is almost never the good guy in these stories. Many super heroes start from shady experiments. Many heroes are chased by government jerks that want to experiment on them and indeed, turn them in to weapons. But the parallels don’t end there.

Firestarter is partly about Charlie’s struggles to control her own power, and her reluctance to use it. Again, most superheroes question who they are and what it all means at some point in their hero’s journey. Like Charlie, many superheroes struggle to control their power, and create collateral damage that weighs on their psyche. Bruce Banner is a prime example:  he doesn’t want to use his Hulk powers, and he struggles to control them when he is forced to unleash the beast. Charlie is much the same—you also wouldn’t like her when she gets angry. Her power, just like the Hulk’s, explodes out of her and she doesn’t necessarily know how to control it or who may suffer in her wake. Charlie, like Bruce, scares herself. I even questioned whether this origin story was one of a superhero or a supervillain, because as Charlie admits, she partially likes it when she uses her powers. At the end of the day, though, she doesn’t want to kill people. Like any good hero, she does it only out of necessity. But like any good hero, Charlie isn’t only light. She is running from her own darkness, which is what makes a superhero truly interesting.

Do you like super hero stories? If so, give this one a read. It wasn’t what I was expecting from a Stephen King novel, but I’m so glad that this is what I got.