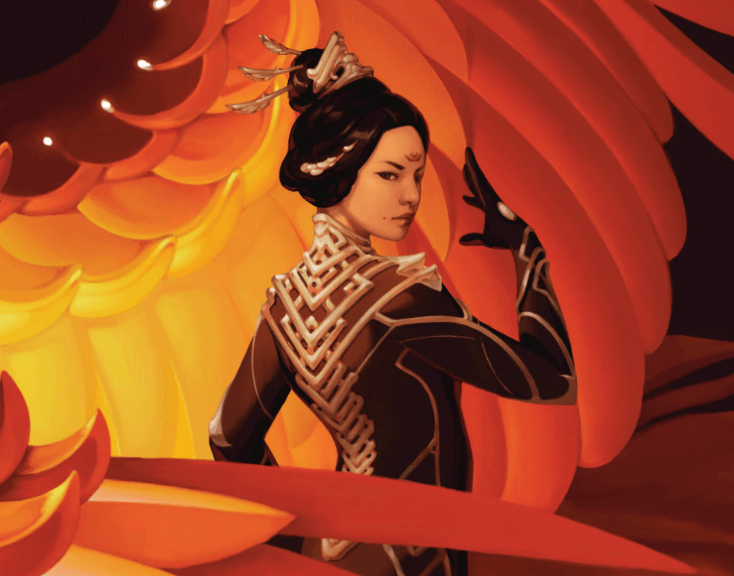 That was my first impression of Iron Widow by Xiran Jay Zhao. Was it super well written? Not necessarily. But I still enjoyed the heck out of it.

It’s slightly harder to quantify WHY I liked it so much, but I’m about to try:

Interesting premise: In an alternate sci-fi world where humans (the book is generally Asian-centric and vaguely references some figures from Chinese history, but the world isn’t parsed into whether anyone other than Asians are still alive or ever existed in this universe) are at war with an alien species, boys get to pilot these giant mechs to fight the aliens. But they require two people to pilot them — they have two seats — one of which is given to a girl who is a “concubine” for the boy pilot. At best, she is there to comfort, support, help him. At worst, she is his battery as he drains her energy to power the mech.

Our story follows an 18yo girl named Zeitan, who “volunteers” as a concubine (her family was trying to sell her as one anyway) so she can kill the pilot who killed her sister. But he seems like such a nice guy — did he really do it? And if so, was it because of who he is, or because of how the system is set up?

That’s all resolved within the first few chapters, after which Zeitan realizes she actually has quite a bit of power on her own. Then, to keep her under control, the system (i.e. the government, the military, the male-centric war machine) shoves her into a partnership with a more dangerous pilot who accidentally kills all the girls he flies with. Will she survive?

Very little  angsty drama from stupid ‘false choice’ setups: I knew I was tired of love triangles (“oooooh, which boy will I choose? I luuuurve them both so much but I may only live out the rest of my days as the slightly less advantaged parter to one of them. Who will protect me better?”).

Also, of that one moment when the ‘big secret’ makes a person who said they loved the MC decide she isn’t worth loving. (Like, if she did a thing you don’t approve of, or that you think makes you look bad, or that in some way “impugns your honor,” you suddenly don’t love her anymore? She’s “not who you thought” she was? Maybe ask a girl a few questions before deciding you want to “make her yours.”)

Also, of the idea that women are either a prize to be won or a supportive companion so the hero can self actualize. (To be fair, there are plenty of stories where the women are the heroes and that don’t end in a wedding, but the number of movies still made today where a woman is standing behind a dude on a poster and they’re both looking into the middle distance and you just know at some point she’s going to turn to him and say “what do we do now?” like she isn’t an adult with functioning brain cells… ugh. P.S. if you haven’t seen Reese Witherspoon’s talk about women in movies saying “what do we do now,” it’s delightful.)

I didn’t know just how tired I was of those things until I read this book. This story turns a lot of those ideas on their heads, and I loved that about it.I giggled out loud when I read this quote: “Perks of refusing to play by the rules: you don’t have to choose between the boy who’d torture a man to death with you and the boy who welcomes you back with pastries.” (Partly because the scene is set up for a giggle, and partly because it’s great to see rules being broken in the world she is trapped in.) Note: you don’t necessarily have to be into polyamory to enjoy this book (I’m not, but I did), any more than you have to be lgbtqia+ to enjoy a book with queer main characters.

The negatives: It wouldn’t be fair to you, dear reader, to not mention the negatives. I’ve read a bunch of Goodreads comments that poke holes in the plot, eviscerate the characterization and world-building, and generally hate on the book for being by a social media celebrity. For the most part I agree with those reviewers — yes the characters are a bit flat, yes the world-building is lacking, yes the plot twist was a bit slap dash at the end there, and if you’re looking for hard sci-fi, this isn’t it. On the other hand, it’s definitely entertaining even if it’s not perfect, and I love a book that offers girls and women the opinion that they don’t need to sit down and wait for a man to tell them how to be (even if this book delivers the narrative in ways that are a bit heavy handed at times).

Therefore, if you go in knowing it’s not going to be perfect (an author’s first book rarely is), I heartily recommend it to anyone who thinks it could possibly be a good fit given your reading tastes.

If you’ve read it already, what did you think? Or do you have questions about whether it’s a good fit for you? Let us know in the comments.

Bonus: Below (in blue) is the author’s review of their own book (quoted from Goodreads). I thought it worth sharing because it made me like the author even more.

“Been seeing some confusion about this so thought I’d clarify here: this book is not historical fantasy or alternate history! It’s a story set in a totally different sci-fi world with characters who are only inspired by historical figures from across Chinese history (not just the Tang dynasty). Lots of creative liberties were taken for thematic purposes, so the characters only resemble the historical figures in personality and general vibe. Kind of like comic book adaptations/elseworlds where they play around with the iconic characters’ backstories or place them in radically different life circumstances. All historical references should only be seen as Easter eggs instead of attempts at accuracy, since there’s no specific era to be accurate to 😂 But if you want to learn the actual history of Empress Wu’s life, I’ve made some videos going into detail about it!

Serious PSA: When I wrote this book, I was told by multiple people that I would encounter resistance at every step (publishers, reviewers, libraries) because I’m letting the protagonist enter a polyamorous relationship instead of forcing her to choose between two love interests, and they have basically never seen that done in YA before (though there actually ARE a few! Strange Grace by Tessa Gratton, for example). There’s no doubt that my journey would be a lot easier if I had cut the MFM triad into a standard YA love triangle. But, I persisted. Because barriers will not come down unless you BREAK THEM. Only by publishing more poly books can it be normalized, and future authors writing it won’t have to go through the same struggle.

That being said, if you see any people anywhere slamming this book because of the polyamory, please do NOT engage or harass them. Likely, you cannot change their minds. Please do not start witch hunts in authors’ names. Just keep supporting us, and we can ride it out!

Because of the harassment and slander that I’ve received on Goodreads, though, I will no longer be checking this page. I’ll still be supporting other books, but if you have any questions about mine, please reach me at my Twitter, Instagram, Tumblr, or the email on my website! I literally won’t see your question otherwise.

Please think critically about what you read. I have never engaged directly with a reviewer, and I never will.

Under siege by monsters beyond the Great Wall like that shitty Matt Damon movie, except the monsters are Cybertronian-like sentient machines, a society that has the fashion, social customs, and beliefs of Ancient China but futuristic tech fights back by pulling a Neon Genesis Evangelion and rebuilding their very invaders into giant mecha. A boy-girl pair in their teens, because of course they have to be teens, pilot the mecha Darling in the Franxx style, except in a much more sensible position (he hugs her from behind). Under command of human pilots, these mecha take on forms inspired by East Asian myth creatures and transform like Transformers through Digimon-esque evolution lines that get more humanoid as you go on. The pilots physically embody them, so it’s more Attack on Titan than Gundam. Oh, and they blast qi attacks, so the battles honestly read like a bunch of furries engaged in a Dragon Ball Z fight, and that’s no one’s fault but mine.”