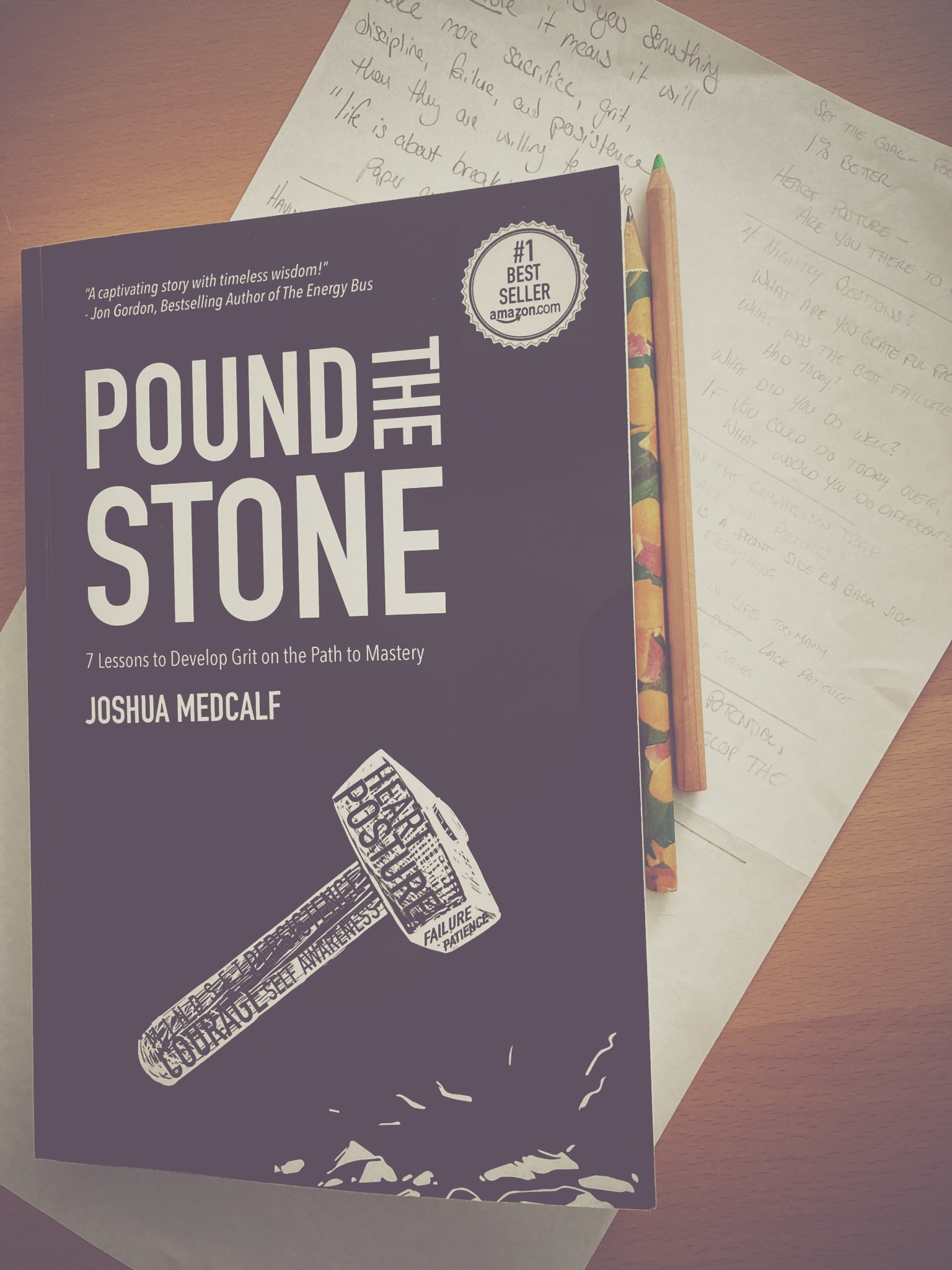 This week, guest poster Gillianne kindly agreed to review a personal development book that she enjoyed. She’s eager to share what made it so memorable.

One of my favorite types of books are parables—personal growth lessons wrapped in a story with relatable and likeable characters. Pound the Stone by Joshua Medcalf is a great example of this category. Joshua Medcalf writes in a simple style with easy-to-read language, clear points broken down into brief chapters, and likeable characters who you end up rooting for along the way, even when their mentor has to remind them of the same lesson more than once.

The story introduces high school basketball player Jason, who has a chip on his shoulder and something to prove. After losing control of his temper and getting kicked off the basketball team, he gets a second chance in the form of a door-to-door sales job. Jason learns lessons throughout his experiences from the couple he lives with for the summer, and slowly becomes a better version of himself.

Jason’s desire to be the superstar basketball player is driven by his natural talent that has been praised throughout his life, but he is hampered by his family situation. He spends the summer selling personal growth books through a sales skill training program. The first lesson he learns in the kickoff for the sales program is to “Pound the Stone.”

When nothing seems to help, I go and look at a stonecutter hammering away at his rock perhaps a hundred times without as much as a crack showing in it. Yet at the hundred and first blow it will split in two, and I know it was not that blow that did it, but all that had gone before.

Through the story, Jason discovers that what he believes about himself and his abilities influences how other people see him. (Maybe, as the reader, you find out the same about you. If so, the personal growth parable book is doing its job!) He makes a point to change his image, read the books he is selling, and ultimately he learns to stop watching the scoreboard and the clock while he ‘pounds the stone.’ He develops grit through discipline, sacrifice, failure, and persistence as he knocks on door after door. And he finds out these lessons are useful not only in his role as a book salesperson, but also in his basketball game and in his relationships with friends.

He (just like me) stumbles from time to time, trips over obstacles, and gets caught up in the comparison game with those around him. But when he opens himself up to them, the lessons are revealed through overcoming those obstacles.

Although it’s not the thinnest book at just over 200 pages, it’s a quick read and you are sure to pick up at least 2-3 lessons you can use to make a difference in your work, your projects, or your hobbies today.

My top two lessons (which might just change if you ask me again tomorrow) were:
There is a front side and a back side to everything; be careful of the comparison trap.
There is value in basic inches; instead of seeking the remarkable, do the unremarkable with remarkable consistency.

If you’ve read this book, let us know in the comments what lessons stuck out to you. If you haven’t, what’s your favorite personal development book?