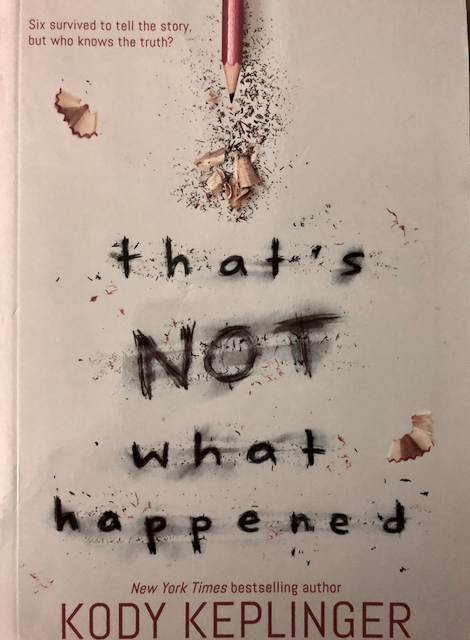 This book crossed my path when I received an ARC of it at BookCon 2018. I almost didn’t read it because the subject felt so heavy, and not like my normal taste in books. But I decided I ought to at least give it a try, and I was surprised at how quickly I finished the book. Here are a few of my thoughts:

1) It’s not even really about “a school shooting.” It’s about what happens to a group of people, how they all react, when they’ve been directly or indirectly affected by a tragedy. The tragedy happens to be a school shooting, which looks a little bit like ones we’ve all heard about, but comes from real research that the author has fictionalized.

2) I was riveted. I literally did not want to put this book down. It wasn’t an amazing plot with twists and turns — you basically know the key issue from the very beginning and very little is revealed that you couldn’t have guessed — so I’m not sure why I was so riveted, other than that I almost got to feeling like I owed it to real people who have been through something like this to try to understand it better.

3) The story feels important. It reminded me that sound bytes on the news aren’t representative of what really happened in a given situation. That one point of view does not make the truth. That there’s more to a person than what other people see of them. And that my opinion of the right way to go about a thing may not match with someone else’s, and that person should have equal say in their own story.

If this book is in your hands and you’re wondering whether you should read it, I’d suggest you give it a try. Some of it is hard to hear, but it’s worth the read.

(That being said, if you need a trigger warning, there’s lots of difficult stuff in this book; from descriptions of some of what happened during the school shooting to the things that happen to people after tragedies, such as PTSD, depression, alcohol references, etc. If you want to avoid reading about these things, then this book is probably not for you.)

What books have you read lately that you wouldn’t normally have chosen? Were you surprised by your reaction to them? Let us know in the comments!