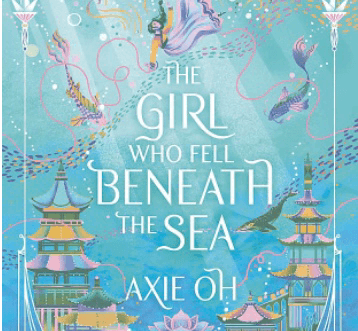 Last week, someone posted images of the US and UK covers of The Girl Who Fell Beneath the Sea by Axie Oh in a Facebook group I follow. The UK cover in particular (above) is GORGEOUS.

So a few days later, as I was scrolling through Hoopla’s popular borrows list, the title jumped out at me and I thought, “YES!”

I knew almost nothing about this book when I started listening, but I can now tell you that it is a “feminst retelling of the classic Korean folktale The Tale of Shim Cheong,” that it was a delightful surprise, and that it’s my first five star read of 2022.

The story is centered around Mina, who lives in a village that believes the Sea God who once protected them has now turned his back on them, leading to annual storms that are slowly destroying their lands. In an attempt to appease him, every year a maiden is tossed into the sea in the hopes that one of them will be the Sea God’s bride (because legend says that when his wife is found, the curse will break and peace will return). Mina wasn’t supposed to be the chosen maiden, but in a very “I volunteer as tribute!” moment, she throws herself into the sea to save her brother’s lady-friend, who had been selected as the next sacrifice.

What happens next is a story filled with interesting characters, fascinating folklore I don’t have a lot of experience with, and let’s not forget the dragon.

In addition to a whole host of interesting, well-developed characters, this book stood out to me because it managed to do what a lot of feminist-slanted books don’t pull off (for me): Mina didn’t need men to save her, but she gladly accepted the help of anyone with good motives. She knows her strengths, and is more than willing to supplement what weaknesses she does have with the friends she collects on her journey. I feel like a lot of books with female lead characters either have them completely spurn help from anyone, or require saving by the male heroes, but Mina doesn’t shut down outside help OR rely on it, and she’s great!

I really liked this book – I consumed it faster than I’ve consumed most books I’ve read in the last few months, and definitely recommend it if you like fantasy stories that aren’t really traditionally “magic.” Don’t get me wrong, it’s definitely fantasy; but if you’re looking for wizards and spell casting this isn’t your book. 😉

If you’ve read this one, I’d love to hear your thoughts about it! Or, do you know of any other retellings that aren’t super-mainstream that I should add to my TBR? Hit me up in the comments and let’s talk about it!