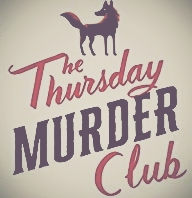 As you may know from my recent TBRs, I’ve been on a real murder (story) spree lately.

This book is a delight!

The story is set in a retirement village where a group of septuagenarians (and at least one octogenarian, but we’ll never tell; he does pilates to stay young!) puzzle out cold cases that one of them has been holding on to since her time on the police force. The narrative begins through the journal of Joyce, recently added to the group, and progresses from there.

Though we spend the most time from Joyce’s (a retired nurse who has a rocky relationship with her successful adult daughter), Elizabeth’s (was clearly some kind of spy in the 1970s and 80s, but she’s not allowed to talk about her work), or Donna’s (a young police detective) points of view, there are opportunities to meet each of the characters and learn their rich backstories, and hear their fears and hopes, each in very individual, authentic voices.

Being an American, I couldn’t peg all of the exact British archetypes, and even as an Anglophile I found I had to look up a reference or two. However, the overall Britishness of the story, the characters, and the way they all interact made the book so fun to read! After finishing, I immediately wanted to read another book in the series, to stay with this group of people. Did I love them all? Absolutely not. But I did want to stay in their world a bit longer.

Some criticisms I saw in the comments and reviews on Goodreads, which I would like to address to better elucidate my feelings on the book (if this is too much for you, skip down to the P.S.):

P.S. I did this one as an audiobook, and the reader (Lesley Manville, a famous British actress) was fantastic. I highly recommend the audiobook version! Plus, you get a bonus interview with the author at the end, conducted by an Irish author whose accent is genuinely delightful.

Anything to add? Let us know in the comments!