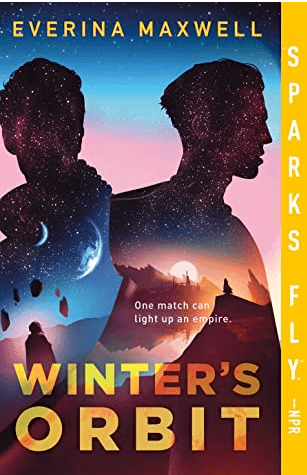 If you’ve read my posts about Skyward or The Vorkosigan Saga (among others), you know I love a good space opera. If you’re like me, you’ll find Winter’s Orbit by Everina Maxwell to be a very lovable story.

I loved Ancillary Justice by Ann Leckie so much (maybe I’ll have to review it one of these days; but seriously, if you love space opera do yourself a favor and pick that one up!), but I would never have thought to mash it with the political-enemies-to-lovers rom com that is Red, White, & Royal Blue by Casey McQuiston. However, as that book was also a delight, I figured I would be doing myself a disservice NOT to read Winter’s Orbit.

The basic plot is that we’re in the Iskat Empire, and there are a lot of political alliances that need to be kept up because Iskat rules a bunch of planets (some of which don’t really like it). Imperial Prince Taam is married to a guy called Jainan (who is from Thea, one of the trouble planets). Taam dies under mysterious circumstances, but the empire can’t afford to allow Jainan to stay a widower for long because they have to keep up these alliances. Enter Kiem, a bachelor cousin of Taam’s, who is basically useless at politics but who knows everyone, knows how to party, and is unlikely to screw up too badly as long as he stays in his lane.

One quickie wedding later, and Kiem is now married to Jainan. The two of them accidentally discover that Taam’s death may not have been an accident, and they embark on *gasp* unsanctioned investigations! And the two of them, delightfully, start to have feelings for each other. Oops.

The story is full of danger, character arcs, and empire politics, but it goes one step further with what feels like a realistic portrayal of someone suffering the effects of abuse, and how hard it is to pull oneself out of the cycle. You should be aware that there is both emotional and physical abuse (it happens mostly before the story begins, but flashbacks could be triggering for someone who has suffered in this way; however, I imagine it could also be cathartic).

Plus, it’s a standalone. You don’t have to read a trilogy to get to the point on this one, which I sometimes find so refreshing.

Think you might try this one? If you do, let me know what you think! Also, please drop your favorite space opera in the comments — I’m always in the mood for the space battles, politics, adventure, danger, and ideally, romance!