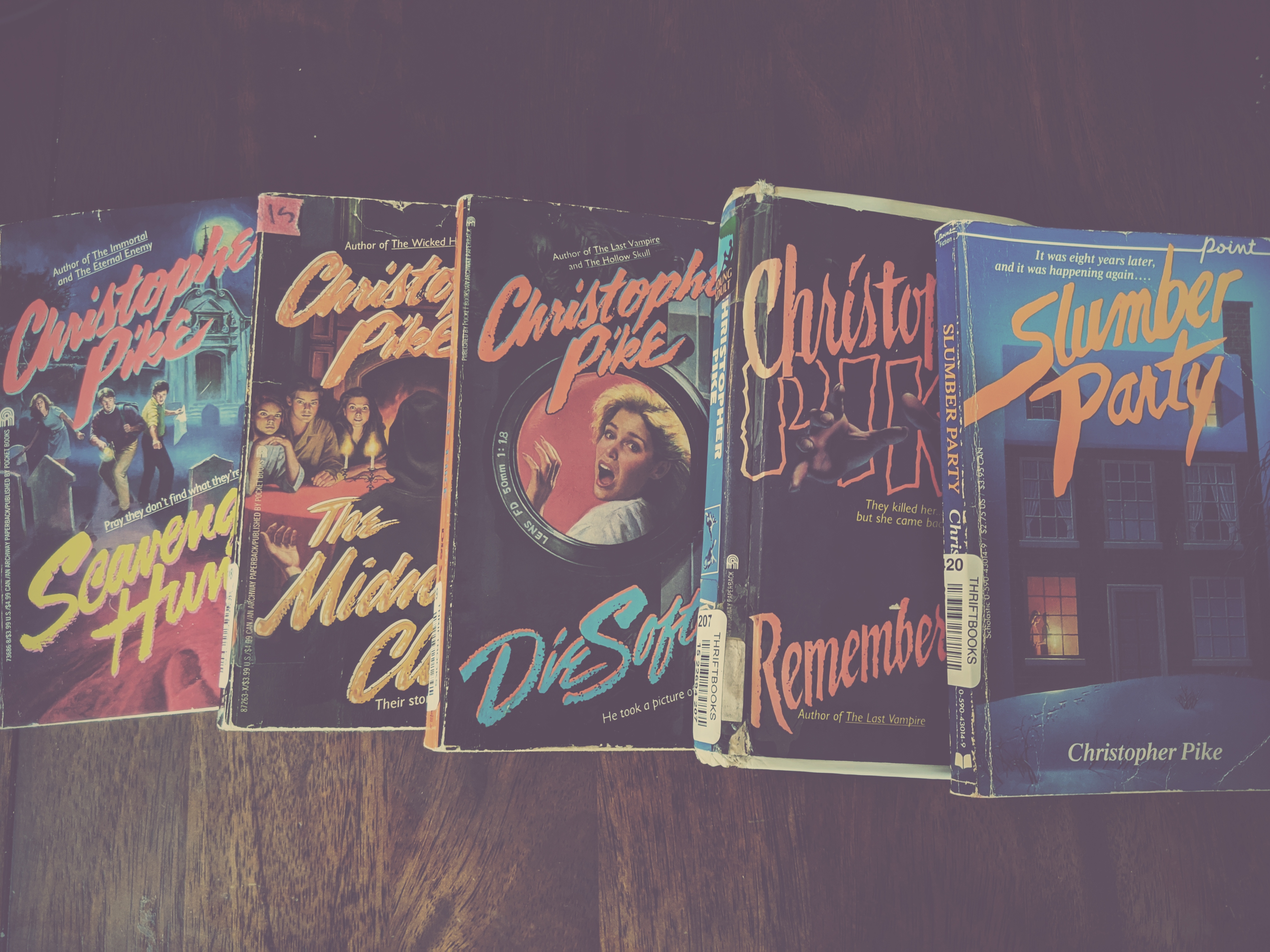 Last year I read five R.L. Stine Fear Street novels in honor of both Halloween and my teenaged years. Several people commented that I needed to do the same with Christopher Pike novels, and here we are. I was a huge fan of Pike’s novels when I was a teen, and they did not disappoint this time around.

In comparison with the Fear Street books I read, the Pike novels are far more developed. The plots are twistier. The characters have a bit more meat to them. They are, overall, better written than the Fear Street series. So if you are up for a bit of Halloween reading with a nostalgic gloss, these are perfect.

Again I chose my Halloween delights based solely on the recognizability of the cover art. I don’t recall specific novels but know I read a whole lot of these, and as I read for this post, a few seemed oddly familiar.

One note before I start: although it isn’t to the same level as what I saw in Fear Street, these novels also have some cringey aspects in terms of the treatment of characters. For instance, in one novel, a character refers to a person with disabilities as an “invalid,” and in another there is reference to a “cripple.” There is also some very insensitive treatment of curvy teen girls. Just know that these types of issues will surface in these novels. I think writers of YA, and writers in general, have done a better job with this more recently. There is a way to be inclusive without being insulting. I don’t think that 90s YA had that figured out yet. Though perhaps I should read a female-written 90s thriller to see if it suffers from the same issues. My guess is that those would at least be kinder to teen girls.

That said, here are some highlights from what I read. This was a fun romp!

1. Slumber Party: A group of supposed high school girlfriends goes to a ski chalet owned by one girl’s family for a weekend. First thought—who allows their teen daughter to go to a ski chalet unsupervised, especially when there is a snow storm coming? Second thought—these girls hate each other so why are they together for a weekend at a ski chalet? Highlight for me: one girl gets lost in a blizzard. Her hands are so frozen that she cannot shoot her flare gun. She pees on her hands to warm them up. Yes. That actually happens. Overall, I really enjoyed this one.

2. The Midnight Club: Not my favorite. At. All. This book was billed as a supernatural thriller with people speaking from beyond the grave. But you know what? It was really a totally different late 80s early 90s YA genre—the teenage death novel. Remember those? The cover art was always a girl staring out a gauzy-curtained window, clutching a teddy bear, with a single tear on her cheek. Lurlene McDaniel was a popular author of these, and Amy apparently read quite a few. Maybe a person would like this novel, set in a hospice for dying teens, if they expected a teenage death novel and not a supernatural thriller. I expected a supernatural thriller and was sorely disappointed.

3. Die Softly: This one was really ridiculous and a lot of fun. The plot revolves around a teen boy that rigs his camera to a VCR so that it will take pictures on a timer from a hidden vantage point in the girls’ locker room. He just longs to see some naked cheerleaders, y’all. The 90s tech is hi-larious. Seriously, he rigs the camera to the VCR, which has to be surreptitiously plugged in somewhere. And guess what? It will only take eight pictures. All that effort for eight pictures. Also…there is an entire group of coked-out popular kids. I don’t know about your high school experience but mine never involved coke. Anyway, this one is a silly, fun read.

4. Scavenger Hunt: OK so I did not finish this one in time, but it does have a fun set-up. Dead bestie, scavenger hunt somehow related to school, yet dangerous. A teen girl that seriously just swims naked in front of teen boys—pretty silly to me considering how terribly self-conscious I was at that age. I am going to finish it, because it’s ridiculous enough to hold my attention. Perhaps I will update everyone later.

5. Remember Me: I saved the best for last. This book was absolute hysterical perfection. I laughed so hard I had tears in my eyes. I called Amy to relay the entire convoluted plot to her. It starts as a typical horror trope: dead person trying to solve their own murder. About two-thirds of the way through, it takes a hard left into WTF-just-happened-ville. This book has it all: ghosts, ghost boyfriends, coked-out teens, weird seance party games, astral projection. If you want humor and nostalgia along with a healthy dose of supernatural shenanigans, this book is for you. Seriously, read this one. And then report back.

That wraps up this year’s Halloween 90s YA party. These were so much fun. What is your fave Halloween read?