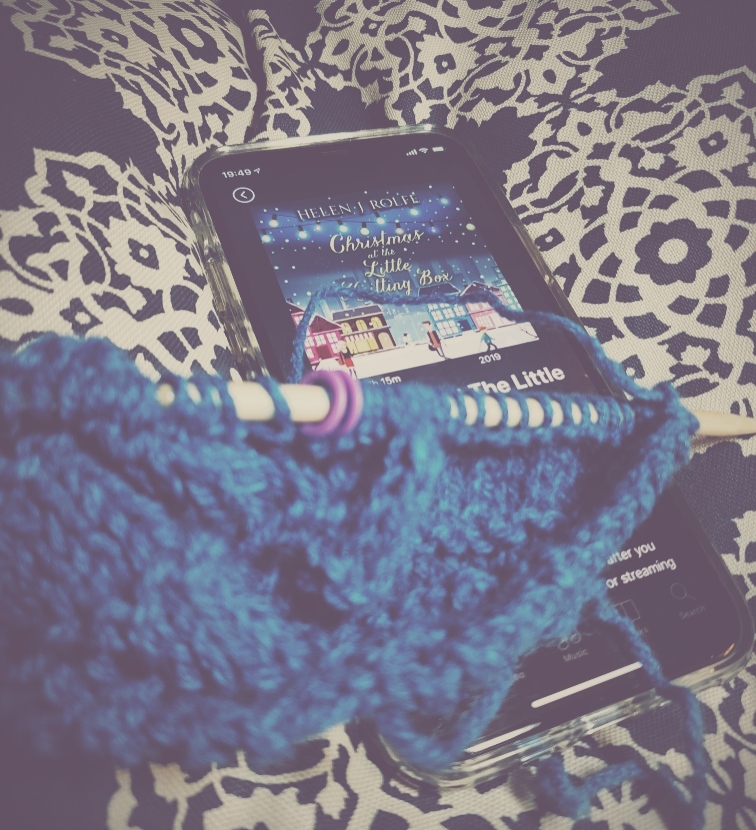 As I shared in my most recent TBR, I’ve begun my annual descent into Holiday reading early, this year. Hoopla is always good for immediately available holiday fluff to get you through the season, so I’ve been scrolling along looking for something to catch my eye, and both the title and cover of Christmas at the Little Knitting Box by Helen J. Rolfe caught my eye a few weeks ago, so I decided to go ahead and give it a try.

The story is centered around a woman named Cleo, who moved to the U.S. to take over the family knitting shop in NYC after her grandmother passed away. Cleo loves her life in the city – she loves the knit shop and the little family of knitters and neighborhood shop owners who make up her social circle, and everything is going fine until the shop owners receive word that the building they rent is being sold, and they have just one year to either relocate or deal with what is likely to be a significant increase in rent to keep their businesses running.

Meanwhile, Dylan has just buried his mother, and is raising his two young children alone after his wife decided that the ‘happy family’ situation wasn’t really working out for her, and wasn’t really the life she wanted after all. Dylan’s been trying to figure out how his property investor father kept up the mirage of affluence, and how to continue on as a work-from-home parent so he can give his children the family life he wants for them to have, all while his wife is running around working for her real estate broker father.

Dylan and Cleo meet at a dinner party and connect over the loss of their parents (Cleo’s mother died very young), and their mutual financial challenges. And then, in a plot twist exactly everyone sees coming, it turns out that Dylan is the seller of the building where the Little Knit Shop resides, but amazingly that isn’t the thing that’s making Cleo wary of a relationship with Dylan. No, it’s the fact that he’s a single father, and she has sworn off the idea of ever being a parent.

There are some things I really liked about this story:

I was NOT a huge fan of the fact that the romance seemed a little bit thin – and felt a little bit rushed. Most of the story was really about what the heck Cleo’s supposed to do in order to keep her store running, and how Dylan’s going to keep his ex-wife from trying to “take back” the divorce, while still wanting her life to be the way she made it when she decided she didn’t want to be a full time mother.

Overall, it’s a cute story, but I’m not sure I’ll be offering it up as a “holiday season must read” to anyone.

Have you read this one, by chance? If so, what did you think about it? I’m still taking recommendations for fluffy holiday romance novels – hit me with your best shot!!