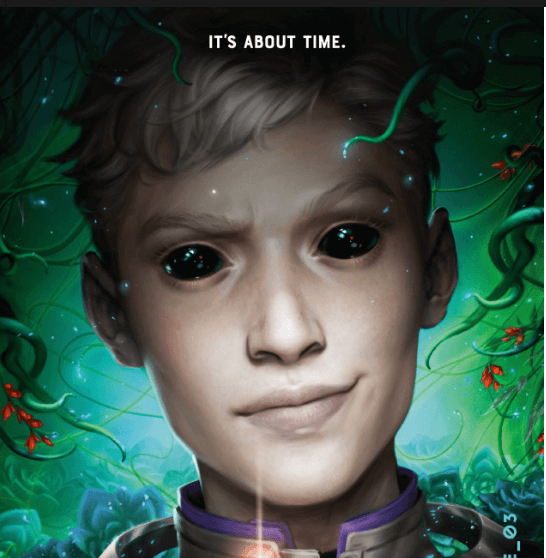 Somehow, all of the library borrows for ongoing series that I’ve been waiting on seem to have come in at once. Okay, not ALL of them, but quite a few.

But if you haven’t read the first book in any of these series, you can assume I must have liked the first book enough to move on to the second and would therefore recommend it to you.

With that said, here’s what I’ve got on tap for the next few weeks:

Aurora’s End (The Aurora Cycle #3) by Jay Kristoff and Amie Kaufmann — This is the final book in a trilogy I’ve been enjoying as they were released over the last few years, and I’m excited to get to the end. Will the intrepid Squad 312 avert the galactic battle to come? I suspect there will be some time travel involved, but we shall see…

Cytonic (Skyward #3) by Brandon Sanderson — Another final book in a trilogy, this one is about Spensa Nightshade, a girl who started book one with the desperate desire to become a starfighter pilot to help save her colony from the aliens attacking the human settlement on the planet Detritus. Did that happen for her? Or did she end up on another mission? I guess you’ll have to read the series to find out.

The Fated Sky (Lady Astronaut #2) by Mary Robinette Kowal — The first book in this duology begins with a bang when a meteor hits Earth in the 1950’s, wiping out much of the northeastern U.S. including all of Washington, D.C. In this alternate universe, they have to rush to get to space before the aftereffects of the meteor wipe out all life on Earth, which is expected to happen in the next 50 years. The main character is a woman who works as a ‘computer’ for NACA (the precursor to NASA), along with her husband who is a rocket scientist, and it’s very interesting to see this alternate version of the prejudices that might have held them back, and the accomplishments that might have propelled them forward, if this really had happened in our world in the 1950s.

The Atlas Six by Olivie Blake — This is our book club book for April, so I’d better get reading! It’s a fantasy involving a secret society, an exclusive archive, a magical contest, and a battle to the death (maybe?). Check out our book club TBR post for this month to find out more.

Dune by Frank Herbert — Yes, I admit it, I’ve never read this sci-fi classic. But I just saw the movie the other day, and it was really good, and now I’m curious to find out how well it fits with the book.

Dark Rise by C.S. Pacat — Another book about a young boy who is going to fulfill his magical destiny, fated to fight (in this one) the Dark King. Yep, I have a type.

Grass for His Pillow (Tales of the Otori #2) by Lian Hearn — This is the second book in a series about a boy with extraordinary powers, set in a fantasy world that is similar to feudal Japan. I read the first one a few weeks ago and enjoyed it, so I’m moving on to the second.

Out of House and Home (Fred the Vampire Accountant #7) by Drew Hayes — Yay for a new Fred the Vampire Accountant book! These aren’t for everyone, but I really enjoy the idea of a regular accountant, accidentally turned vampire, who wants to just keep living his life, and accidentally gains a band of misfit friends along the way. (See my review of some of the earlier books in the series here.) It helps that the audiobook reader is so good.

That’s what I will be reading for the next few weeks. What are you reading this week? Let us know in the comments!