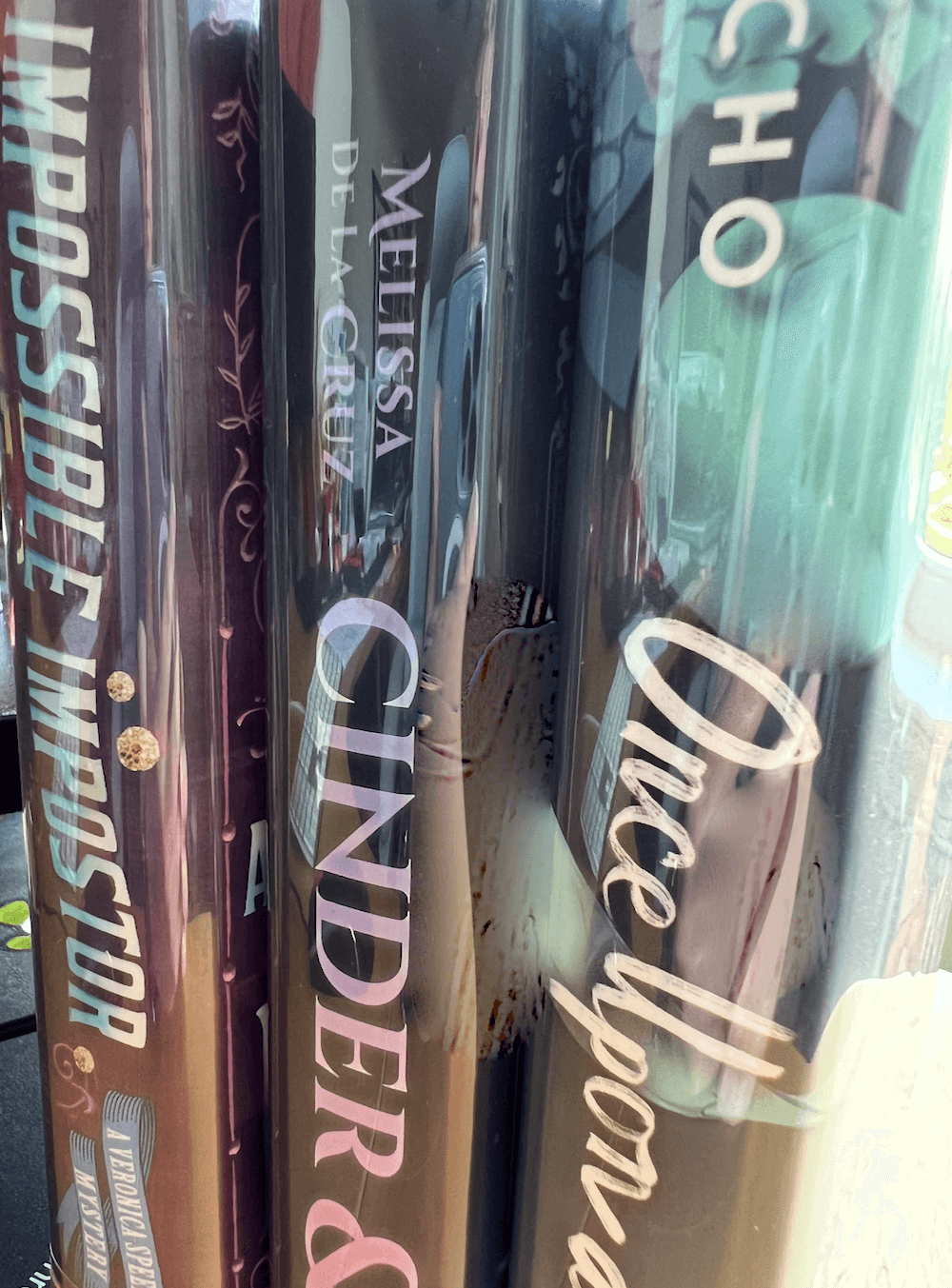 An Impossible Imposter (Veronica Speedwell #7) by Deanna Raybourn — This is a fun series about a couple of adventurers (Veronica and Stoker) in Victorian England who find trouble everywhere they go. The dynamic reminds me of Peabody and Emerson from the Amelia Peabody series, so if you enjoy those books you’ll probably like these as well.

Cinder & Glass by Melissa De La Cruz — It’s very clearly a Cinderella retelling (orphan girl competing for the prince’s hand), but I’m hoping the twist is interesting. Melissa De La Cruz is not a bad writer but her books are hit or miss for me, so we’ll see how this one goes. (If you want a Cinderella retelling but you aren’t sure about this one, you should try Cinder by Marissa Meyer — that series is amazing! It’s a great example of how far someone can take fairytale retellings.)

Once Upon a K-Prom by Kat Cho — This is a book I didn’t know I needed to read until I found it at the library. It’s a girl whose best childhood friend is a K-Pop star, and he comes back to town to take her to prom, as they promised they would go to prom together when they were children. Yep. I’m in.

Between You, Me, and the Honeybees by Amelia Diane Coombs — Two teenagers are having a secret fling because their families are sworn enemies, and with the upcoming small town festival that includes a “honey show” (literal honey; like, from bees), who knows whether they’ll become enemies as well? I don’t know what drew me to this one, except it seems cute.

The Fated Sky (Lady Astronaut Universe book 2) by Mary Robinette Kowal — This is the second book in an alternate timeline where a meteor strike in the early 1950s requires that the space race be sped up or else humanity might die out due to climate change from the meteor dust. The first one was very interesting and I’m looking forward to the second one!

Once & Future Vol 4: Monarchies in the UK by Kieron Gillen, Dan Mora (Illustrator), Tamra Bonvillain (Colorist), Ed Dukeshire (Letterer) — In the last installment, Britain was about to be dragged into the Otherworld. This volume promises an epic battle of historical (fictional?) kings, and Bridgette, Duncan, and Rose will have to do their best to save the day.

The Night Circus by Erin Morgenstern — I love this book. It is beautifully written, and a good story, and I’ve already read it twice. This time, I’m listening to it (for the first time) with the kids. The audiobook is read by Jim Dale, which is good because he’s a solid reader, but I can’t stop hearing Harry Potter characters in his voices. LOL

Scout’s Honor by Lily Anderson — I imagine the pitch for this one was “Ladybirds are like the Girl Scouts, but they kill demons.” I’m about halfway through this one and it is great so far! The characters are fully realized people, and the world is well-crafted, and the story is interesting.

The Happy Ever After Playlist by Abby Jimenez — This is the second book in a contemporary romance series, and I’ve been told this one is even better than the first. It follows one of the secondary characters from the first book. The story is about a woman whose fiance died in a motorcycle accident, and when she has a possible second chance at love she’s not sure she is willing to take it.

The Library of Lost and Found by Phaedra Patrick — A librarian receives a book of fairy tales that sends her on a journey to solve a mystery. Sounds like a book I would like, so I took a chance and borrowed it.

The Upside of Falling by Alex Light — I’m generally wary of Wattpad books, and this YA contemporary romance is built on the fake dating trope (which is a hit-or-miss for me). But it looks cute, and in the worst case scenario it’s only about 6 1/2 hours long, so it’s not a huge time investment.

The Awakening by Nora Roberts — As romance authors go, Nora Roberts is pretty good. She knows how to write sympathetic characters, and she’s good at inventing worlds. Plus, this trilogy is called “The Dragon Heart Legacy,” so… figured it might be worth trying.

The Tombs of Atuan (Earthsea Cycle #2) by Ursula K. Le Guin — This is classic fantasy from a true master of the genre. I maybe read this one when I was younger, though I can’t remember anything about the story so maybe I didn’t, but I recently re-read the first book in the Earthsea Cycle and figured I’d keep going.