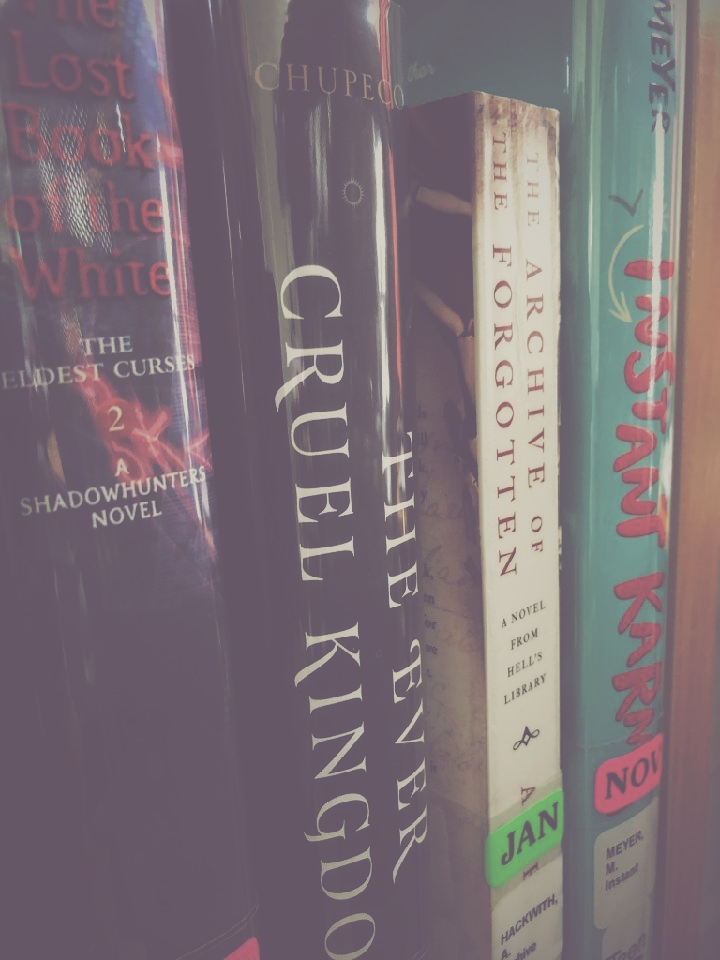 The library is open for visitors once again!

I found myself in there with the kids the other week, and my ‘eyes were bigger than my stomach’ in terms of grabbing a bunch of books I’ve been wanting to read. It’s unlikely I’ll make it through the whole pile in two weeks, but that’s the beauty of renewals.

The Faithless Hawk by Margaret Owens — book two of The Merciful Crow series, a very well-written fantasy series that I am thoroughly enjoying! Unique magic system, well-thought-out caste system, and overall A+ world-building.\

The Blue Sword by Robin McKinley — this is actually book one of the Damar series that I mentioned in my review of The Hero and the Crown (which is book two, a prequel to The Blue Sword, and happens to be one of my favorite books of all time). I just finished a re-read of that with the kids, but surprisingly I’ve never read book one, so the kids and I are reading it together a chapter at a time before bed now that we’ve finished the prequel.

The Lost Book of the White by Cassandra Clare & Wesley Chu — book two of The Eldest Curses series, which feature Magnus and Alec (“Malec”) from the Shadowhunter universe. Oh, how I love those boys!

The Ever Cruel Kingdom by Rin Chupeco — book two of The Never Tilting World series, a sci-fi /fantasy story that imagines a world that has stopped turning, with half in the hot sun and half in the constant cold. The first book was quite an adventure, and I’m looking forward to this second book.

The Archive of the Forgotten by A.J. Hackwith — book two of the Hell’s Library series, a delightful fantasy world where all of the books that were NOT written are held in The Library of the Unwritten (also the title of the first book in the series), but the characters sometimes wander out to try to inspire their authors to write the books. How many books do I have in that library? Hard to say. But the story is very interesting, nonetheless…

Instant Karma by Marissa Meyer — lest you think I only chose ‘book twos’ this week, this one is actually a standalone contemporary story with fantasy and romance elements. A girl wakes up one morning with the ability to deliver karmic retribution to people in her town, and hilarity (and a good life lesson) ensues, or so I’ve been promised. I’ve enjoyed every other book I’ve read by this author (though she usually develops entire fantasy universes, rather than setting some fantasy elements in our world), so I’m interested to see how this one goes.

The Kingdom of Copper by S.A. Chakraborty — book two of The Daevabad Trilogy about the political struggles between castes of djinn and humans. I find them to be lengthy stories, but with VERY interesting world-building that puts an emphasis on kingdom politics and how those affect the characters.

The House in the Cerulean Sea by T.J. Klune — I’ve had this fun fantasy book, about a caseworker helping a group of orphans with magical abilities, on my TBR for a while, but Aubrie’s recent glowing review moved it right up the list!

Tristan Strong Punches a Hole in the Sky by Kwame Mbalia — this middle grade book is the next one I’m going to listen to with the kids. It’s about a boy who enters the world of tall tales and ancient gods, particularly drawing on the stories of John Henry and of Anansi the Spider God for inspiration. I’m excited to see what new twist the author has given to the tradition of these stories.

Gates of Fire by Steven Pressfield — this fictionalized account of the battle of Thermopylae (think Spartans vs. Persians; if you’ve seen the movie 300, you are at least aware of this historical event) was billed to me as the best book on the subject from a storytelling perspective. Military stories, even if they’re historical fiction, are not my usual cup of tea, but I’ve heard so many good things about this book that I’m really looking forward to reading it.

What are you reading this week? We’d love to hear about it in the comments!