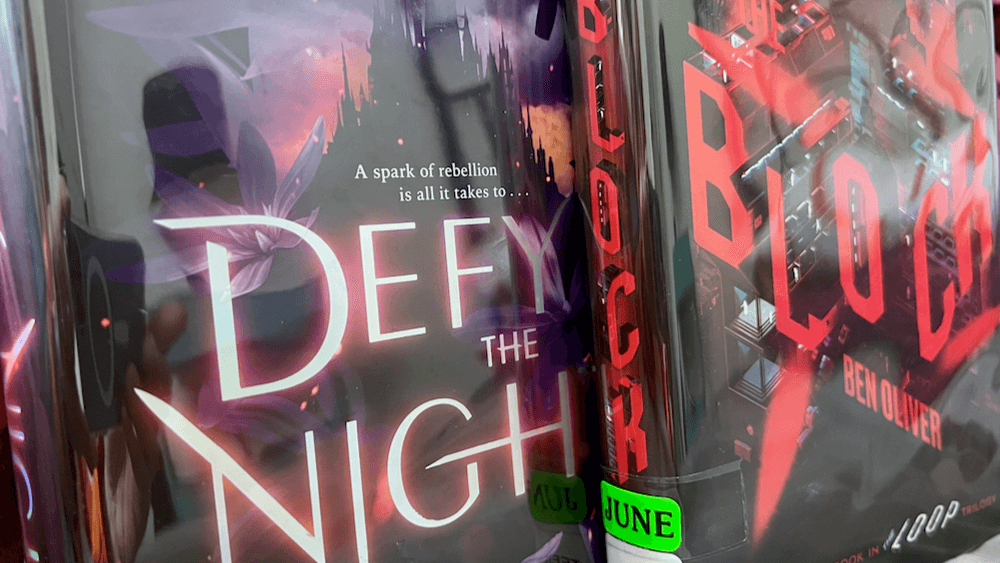 The end of the month was Monday.

That means the rest of my January Hoopla borrows needed to be used. Yes, it’s okay to not use them all every month, but I always feel like I should borrow as many as I can. This time, I went through my Goodreads list and picked out some that I’ve been meaning to read but haven’t gotten to. Yes, this is quite a list, and there’s a chance I won’t get all the way through it in the next three weeks, but I’m sure going to try!

Here’s what I’m reading for the next few weeks:

Defy the Night (Defy the Night #1) by Brigid Kemmerer — Some merciless princes, an unexplainable sickness ravaging the kingdom, an apothecary, and a rebellion. SO many elements that make an interesting fantasy story!

The Block (The Loop Trilogy #2) by Ben Oliver — The first book is about children in a dystopian prison living in a supposedly utopian future. In the second book, events have progressed and the MC from book one is in an even harder situation. I don’t want to give too much away, just to say that even though this type of book isn’t normally my jam, I blew through the first one. Very compelling, if dark.

Skyward (Skyward #1) by Brandon Sanderson — The remnants of the human race are trapped on a planet that is under attack. A teen girl dreams of being a pilot and meets a ship with a soul. Count me in!

House of Many Ways by Diana Wynne Jones — I’ve been enjoying re-reading the Howl’s Moving Castle series with the kids, and we are on the third and final book. I’ve never read this one before myself, so I’m looking forward to a new-to-me adventure featuring Howl and Sophie.

The Other Talk by Brendan Kiely — This is written as a primer on racism, allyship, and white privilege aimed at a younger audience. I’m going to listen to this one with my kids as well.

The Gunslinger (The Dark Tower #1) by Stephen King — I recognize that I’m about late to this bandwagon, but I’m not usually a big Stephen King fan. He writes well, his stories are just usually too dark for me. But this series is supposed to be pretty good, and I’ve heard from a few people who liked it even though they don’t usually like King, so… let’s see what happens.

Adequate Yearly Progress by Roxanna Elden — This is the story of a fictional school and the struggles and triumphs of the teachers as they work to do their best for their students, all while finding love, surviving a new superintendent, and learning what it means to be a teacher in the world today.

The Lady’s Guide to Petticoats and Piracy (Montague Siblings #2) by Mackenzi Lee — I enjoyed the first book in the series (A Gentleman’s Guide to Vice and Virtue wherein Monty goes on a Grand Tour of Europe with his sister and his best friend *cough* and adventures ensue), and this is a continuation of the story from the sister’s POV wherein she attempts to go to medical school and adventures ensue.

The Rook (The Checquy Files #1) by Daniel O’Malley — I don’t know a ton about this one, but I know it involves a high-ranking member of a secret society, mystery, body swaps… looks super interesting!

Palimpsest: A History of the Written Word by Matthew Battles — Picked this one because it looked interesting. It’s a nonfiction, and the Goodreads description says, “Celebrating the impulse to record, invent, and make one’s mark, Matthew Battles reenchants the written word for all those susceptible to the power and beauty of writing in all of its forms.” However, the average star rating is 2.94, so we’ll see whether it’s readable or not…

The Echo Wife by Sarah Gailey — I keep picking Sarah Gailey books, even though they are hit-and-miss for me. This one is about genetically cloned replicas and I have high hopes.

The Secrets of Wishtide (Laetitia Rodd Mysteries #1) — This series is historical fiction about a middle-aged governess who also engages in sleuthing. Thought it looked interesting, sort of like a Miss Marple, I hope?

That’s the list! What are you reading this week? Let us know in the comments!