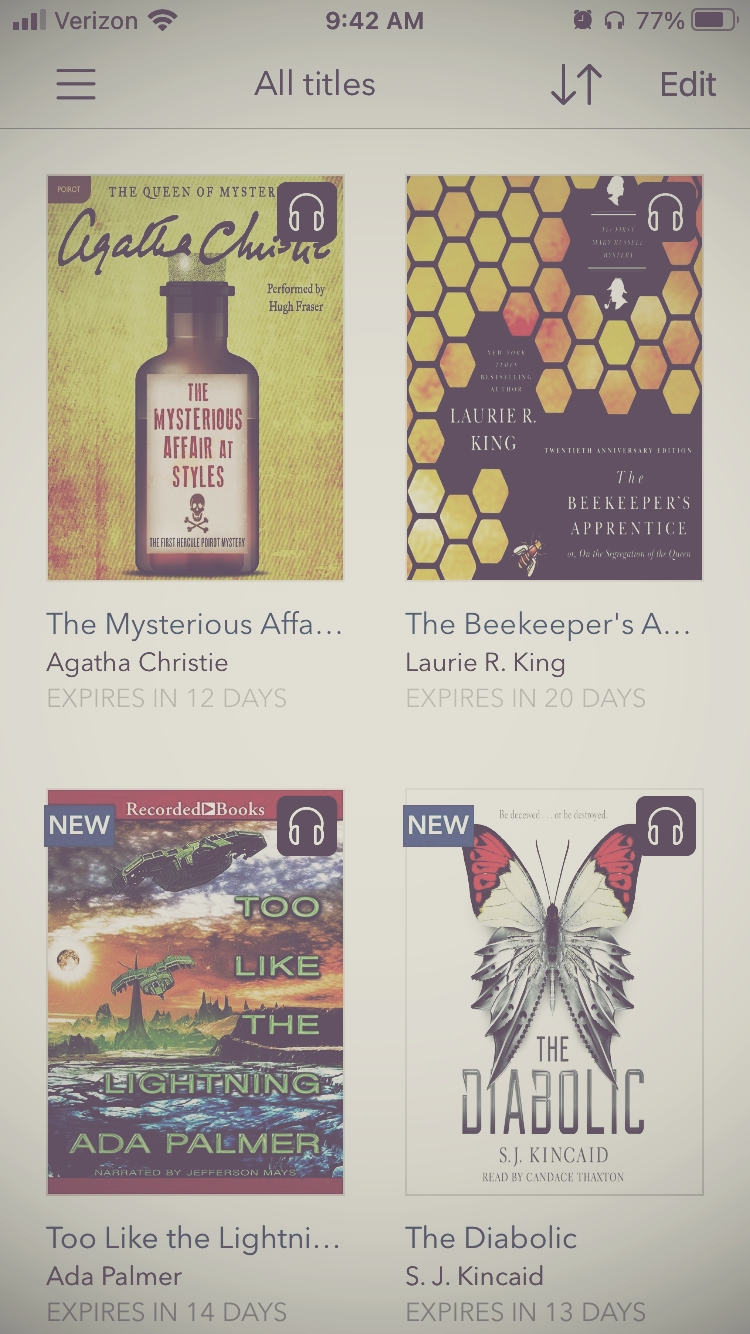 I feel like I’ve got a good mix of TBR for the next few weeks.

In the spirit of Aubrie’s last TBR post, I’ll share my secret to a tame-ish list:  the books included here are only the ones I expect to read between the day of the post and my next TBR post in three weeks. Yes, there are way more books on my ‘full TBR’ than what’s here, but I try to ignore that nebulous, giant, and growing amalgam of Goodreads list + physical books taunting me from my shelf that I may never end up reading + books people have told me about that I’d probably love but don’t have time for. Mostly, I read first whatever is due back to the library soonest, and anything else is gravy. Sometimes I don’t manage everything on the list in just three weeks, but I’m usually close, so I try not to put them on the list twice.

This week, I had a lot of audiobooks come in at once from my library Overdrive and Hoopla apps, so most of what I’m going to read over the next few weeks will be those, though I’ve got a few physical books on my bedside table as well. Here’s what I’m planning to read between now and my next TBR post:

An Unexpected Peril (Veronica Speedwell #6) by Deanna Raybourn — The newest in a series about a woman making her way in the world as a lepidopterist in Victorian times, and solving mysteries with her delightfully piratical companion. If you like the Lady Sherlock series you will probably also like these.

The Thursday Murder Club by Richard Osman — Another mystery series about a group of septuagenarians solving murders. I haven’t started it yet, but I’m hoping it’s like an Agatha Christie story…

The Mysterious Affair at Styles by Agatha Christie — Speaking of mysteries, I’m continuing to work my way through the queen of mystery’s catalogue. As much as I love Hercule Poirot, I’ve never read this one, the very first HP mystery.

The Diabolic (The Diabolic #1) by S.J. Kincaid — Billed as “The Red Queen meets The Hunger Games,” the main character of this one sounds to me like she’ll be sort of like Nebula from Guardians of the Galaxy. I can hardly wait to find out!

Saints and Misfits by S.K. Ali — I don’t know a ton about this one other than it’s contemporary YA with a Muslim main character, and I’m very interested in learning more.

Too Like the Lightning (Terra Ignota #1) by Ada Palmer — I recently read a less-satisfying sci-fi that maybe tried to do too much and didn’t pull it quite together. One of the reviews of that book mentioned this one as a story that does what that one was trying to do, but better. I don’t know anything about the story, but I’m going to try it out…

The Beekeeper’s Apprentice (Mary Russell and Sherlock Holmes #1) by Laurie R. King — My mom has been loving this series about a retired Sherlock Holmes and his young protege. She and I have similar tastes, and I’m in a mystery mood right now, so I think this one will be perfect.

The Lost Apothecary by Sarah Penner — More murder, this time with a mystery spanning centuries about women who poison the men who’ve wronged them. Plus, the cover is amazing.