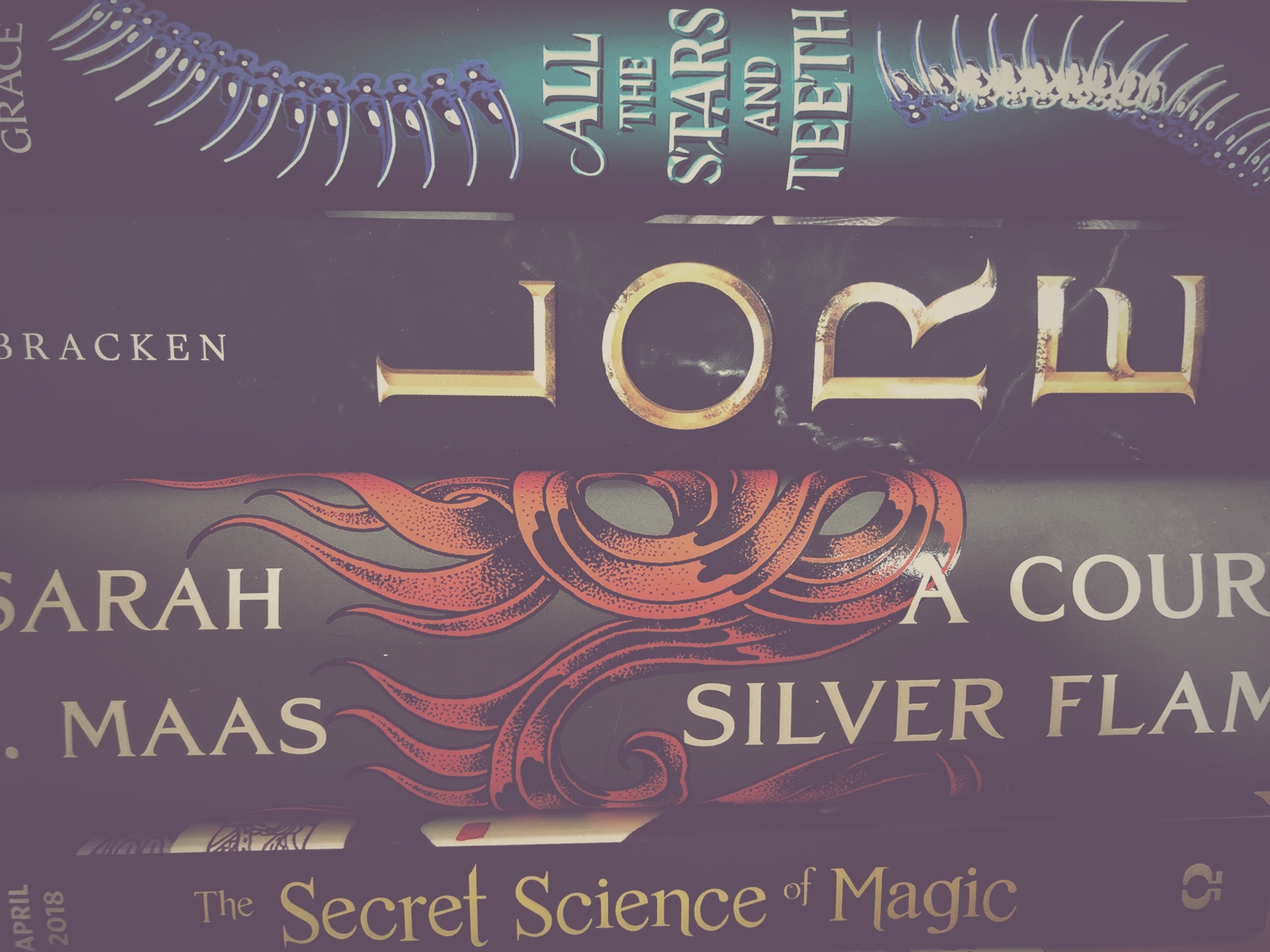 You’re probably as sad as I am that I finished the Vorkosigan Saga, which means there are no more of them to put on my TBR this week.

However, between the stack on my bedside table and the Overdrive holds that have come in, I’ve got lots of other great books to read and listen to over the next three weeks.

All the Stars and Teeth by Adalyn Grace – Princesses, pirates, and magic in a YA fantasy? I’m in. (Thanks to Amy for the lend of this one!)

Lore by Alexandra Bracken – The hunt is on for Greek Gods in this revenge story that sounds to me like a cross between Hunger Games and Percy Jackson. (Another loan from Amy!)

A Court of Silver Flames by Sarah J. Maas – Book 4 of the YA Fantasy series Court of Thorns and Roses, this one follows Feyre’s older sister Nesta. (Thanks to Megan P. for lending me this one!)

The Secret Science of Magic by Melissa Keil – A teen romance(?) involving a science-minded girl and a boy who loves magic tricks. I got this one at BookCon 2019, and it’s been waiting for me ever since…

Ask for More by Alexandra Carter – This book is written by a Mediator / Negotiator and walks through the right questions to ask yourself and the person you’re negotiating with for better success. I’ve just begun this one, but so far I like her advice!

Emily the Strange (vol 1) by Rob Reger – This is a graphic novel about a 13-year-old girl with a razor-sharp wit and lots of cats. Reminds me of my daughter, so I figured I’d give it a try. I hope it’s going to be kid-friendly because I desperately want to share it with her!

Carry On by Rainbow Rowell – The first in the Simon Snow series, which is basically a Harry Potter spoof that was spawned from Rowell’s book Fangirl. Imagine if Malfoy was a vampire and had a crush on Harry. It’s delightful. This is actually a re-read, as I’m preparing for the third and final book to come out this summer.

Untouchables (Empire High #1) by Ivy Smoak – I’ve read an adult romance by this author and enjoyed her ability to build characters and stories. I didn’t love the (high) quantity of adult content. Thus, I’m trying this book of hers about YA characters (not sure if the author has aimed at a YA or an adult audience) because maybe it will have lots of what I like about her writing and not so much of what I don’t.

A Quest of Heroes (The Sorcerer’s Ring #1) by Morgan Rice – I don’t even really know what this one is about. I saw the title of the book, of the series, and read ‘epic coming of age fantasy story,’ and immediately borrowed it.

The Empire of Gold (The Daevabad Trilogy #3) by S.A. Chakraborty – This is the final book in the Djinn series I’ve been enjoying. Totally worth it if you love fantasy stories with richly drawn worlds, lots of politics, and magic.

The Secret Adversary by Agatha Christie – I’m on a bit of an Agatha Christie kick right now, after attending a virtual book club about my favorite Christie story, The Murder of Roger Ackroyd. In the chat, people recommended a ton of Christie books I’d never read, so I’m working my way through them. I just finished Crooked House (very good! reminded me of Knives Out), and this one is next. It’s the first novel with Tommy and Tuppence, whom I only just learned about when I read (and reviewed) the Midwinter Murder short story anthology.