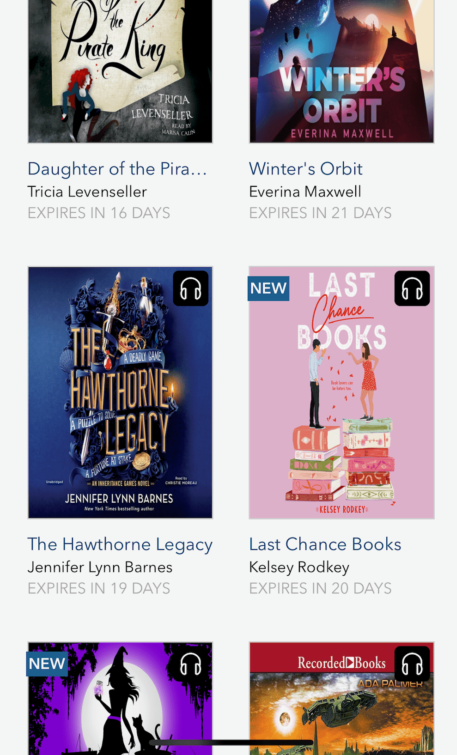 Over the next few weeks I have a bunch of ebooks, physical books, and graphic novels, as well as the usual boatload of audiobooks, so the next part of the usual phrase (‘and so little time’) feels particularly apt. (Just ask Amy. The number of audiobooks I’ve already downloaded into Overdrive and Hoopla make her eye twitch.) But that’s never stopped me before, so here we go…

Well, This is Exhausting by Sophia Benoit — This is a series of essays by a columnist / Twitter personality who writes about choosing not to try to be perfect. I’m hoping it will be funny like Jenny Lawson stories.

Vicious (Villains #1) by V.E. Schwab — Goodreads describes it as “A masterful tale of ambition, jealousy, desire, and superpowers.” Since I’ve enjoyed other Schwab books, and since Amy liked this one, I imagine I’ll like it too.

Beast Boy Loves Raven by Kami Garcia and Gabriel Picolo — This is a continuation of the Teen Titans series, which began with a Raven origin story, then a Beast Boy origin story. Part 3 brings the two characters together. It has a different flavor from any of the Teen Titan shows I’ve seen, and it’s an interesting story so far!

Vote Loki (Vol I) by Christopher Hastings and Langdon Foss — Loki is running for president, and I’m very interested to see what tricks he pulls to get there.

Loki: The God Who Fell to Earth (Vol I) by Daniel Kibblesmith & a team of artists — Another Loki series that puts Loki and Iron Man together. I love all of the Loki content that’s out right now!

Pride & Prejudice by Jane Austen, adapted by Nancy Butler and Hugo Petrus — I love P&P, and the cover for this one (made up to look like a women’s magazine) was interesting enough that I figured I’d give it a try. Some reviewers hated it, or hated the artwork, and many felt it was just ‘meh,’ but I’m going to make up my own mind.

The Hawthorne Legacy (Inheritance Games #2) by Jennifer Lynn Barnes — I’m VERY excited for this continuation to The Inheritance Games that came out in September! I just re-listened to the first one with the kids, so we’re going to start this second one ASAP!

Daughter of the Pirate King by Tricia Levenseller — A 17-year-old pirate captain has to retrieve a treasure map, so she lets herself be captured by enemies. Sounds like there’s a bit of a heist, and definitely the potential for an enemies-to-lovers sub-story, so I am totally in!

Winter’s Orbit by Everina Maxwell — A sci-fi with a side of romance that marries off the husband of a dead prince to the prince’s cousin (against the wishes of all concerned), and the pair must work together to try to prevent a war between their two planets, while solving the prince’s murder. Looks like another enemies-to-lovers story, and I’ve had it on hold for a while now. Interested to see how it turns out.

The Screwtape Letters by C.S. Lewis — This is a classic satire by the author of the Chronicles of Narnia about what damnation and temptation mean. I’ve read it before, but it has been a long time and I felt like I needed a re-read.

Crown of Danger (The Hidden Mage #2) by Melanie Cellier — I am also reading this YA fantasy series (that Amy introduced me to) about mages and family and powers that don’t match what people expect of you. You can read Amy’s review here.

The Runaway King (Ascendance Trilogy #2) by Jennifer A. Nielsen — The kids and I just started this middle grade series about a kingdom on the brink of war, a royal family in danger, and a prince who can save everything. We liked book one enough that we’ll start book two right away!

Aristotle and Dante Discover the Secrets of the Universe by Benjamin Alire Saenz — A teen coming-of-age story about friendship and love and found family. I wasn’t sure whether I wanted to read this one (because angry contemporary teens isn’t my usual jam), but I have heard great things, so I figure I’ll give it a try!!

You’re So Dead by Ash Parsons — It’s supposed to be a “hilarious Agatha Christie-inspired YA thriller-comedy…perfect for fans of One of Us Is Lying and Truly Devious.” We all know how I feel about Agatha Christie and Truly Devious (for the record, One of Us Is Lying was fine), so this one sounds like a book I’d enjoy. The star rating average is a bit low, but we also know how I feel about star ratings, so I’m down to at least try this one to form my own opinion.

Moonshine & Magic by Bella Falls — This cozy mystery was recommended by my library app as a book I might like, and the cover is super cool, it’s set in a place called Honeysuckle Falls, and I was feeling in a Hallowe’en-y mood, so I downloaded it on a whim. Will I  have time to finish it with all of these other books on the docket? That’s the real mystery.

I actually have a few more already downloaded into my library app, but there’s virtually no chance I will make it through this whole list in the next three weeks, so those can wait until my next TBR. Hopefully they’re renewable!