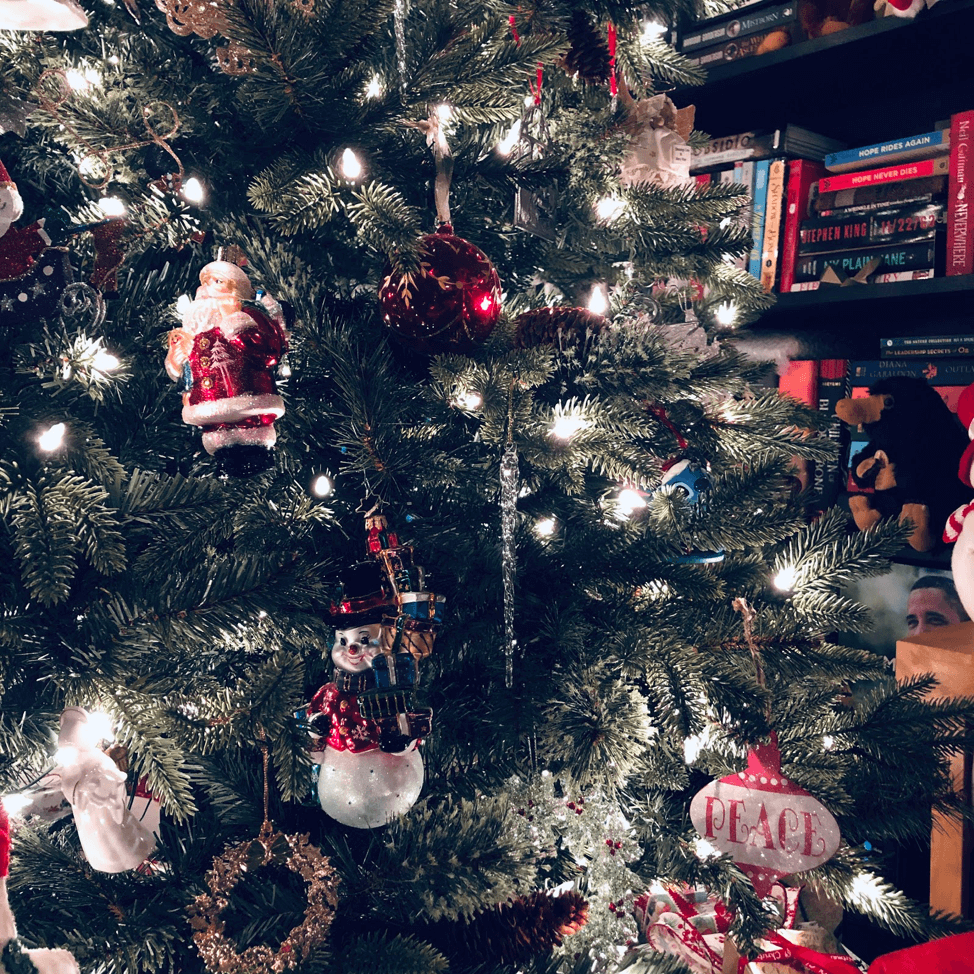 It’s December. Ohio is getting colder and the days everywhere are getting shorter. I’m the kind of reader who tends to genre hop a bit, but once I read a book I like I often stick around in that genre for a while. I’ve been in a bit of a romance/contemporary phase the last few months, and was on the waiting list for a book that kept popping up on my Goodreads feed: We Met In December by Rosie Curtis.

The story starts when 29-year-old Jess decides to move to London to pursue a new job in editing. She’s only able to afford it by way of a friend from university who has inherited a well loved and slightly disheveled house in Notting Hill. When she arrives at the house and meets the people she will be living with, Jess almost instantly develops a crush on one of her housemates, Alex, who has also moved to London for a fresh start. He has left behind a stable, well paid career as a lawyer to pursue nursing – a decision that none of his friends and family understands, least of all his now ex-fiance. This book is just a sweet story told over the span of a year about two people trying to figure out who they want to be, and how to do that when no one else seems to understand why they’re doing what they’re doing. I enjoyed it quite a bit!

Since I liked it so much, I decided to close out 2019 with a little tour of some Christmas books. After perusing a few seasonal recommendations from The Modern Mrs. Darcy, I scrolled through Hoopla’s selection of Christmas audiobooks and found a few to try out while doing some holiday baking and gift wrapping. I was just looking for sweet holiday stories, and that’s exactly what I found.

I downloaded Wrapped Up In Christmas by Janice Lynn and listened to it over the next few days. This story is set in a small Kentucky town where Sarah, heartbroken enough times to be trigger shy about relationships, has decided to dedicate herself to church projects that she works on with her hilarious gaggle of elderly best friends who she calls The Butterflies while also working to finish renovating her aunt’s former home into a bed and breakfast in time for Christmas. Sarah and The Butterflies are working on making ornaments for the town’s Christmas festival when a tall, handsome stranger shows up and asks for her by name. The ladies all assume that Bodie is there to answer an ad Sarah has placed for a handyman. He’s really there to fall in love with her  to find the woman who made the Wounded Warrior quilt he was given while recovering from physical and emotional trauma he received as an Army Ranger.

Sarah loves Christmas. Bodie doesn’t care about Christmas at all. Sarah’s all sunshine and happiness (mostly). Bodie is still dealing with lingering guilt about the IED that injured him and killed his troops. The Butterflies are hilarious and meddlesome and they just know (as you do the minute you decide to read this book) that Sarah and Bodie are MEANT TO BE, and go out of their way to help make that happen. There is also a super sweet dog, who’s basically a person.

This book is sweet without being saccharine, and the tamest of romance stories (which I now believe is likely a “thing” with Hallmark books?). It’s just cute, and I enjoyed it.

I finished Wrapped Up in Christmas on my way to work, so I needed something new for my drive home, and Hoopla gladly offered up The Best Christmas Pageant Ever by Barbara Robinson. I remember reading the story as a child and really liking it, but it’s been *cough*thirty*cough* years or so, and it was a short audiobook, so I checked it out and started listening. It was a delight! There were parts I laughed at as an adult, and found myself wondering if I had enjoyed the same lines or hilarious fails on the parts of the children in the story when I was a child myself. And I know that as an adult I found a different level of poignancy in the events of the pageant on the day of its performance. There’s not a lot I can say about this book other than it’s a story about a small town’s performance of the Christmas Story and the not-as-hostile-as-they-feared takeover of Sunday School by the town bullies when one of them hears that there is cake and candy available for attendees. It’s a charming, festive read.

For my final (but is it, though?) holiday read I downloaded A Timeless Christmas by Alexis Stanton. This one is another Hallmark branded romance novel where there’s nothing beyond a shared kiss between our love interests, but so much of this story is everything I love. It’s Kate & Leopold meets Outlander meets every tropey romance novel where someone is not who they appear to be (but really he IS the dude who owned the house where they now do historical reenactments of his life since he disappeared in 1902!). In this one, a wealthy inventor accidentally time travels to 2014 where people are glued to smartphones and everyone’s house is fully wired for electricity and has hot water heaters and he wants to take it all apart and figure out how it works – but he also really wants to go back to 1902 to stop his biggest rival from basically taking over where he left off when he vanished. But, there’s this modern girl who is smart, and funny and when she smiles he can’t look away. But he really has to figure out how to go home to 1902 before Christmas because of his masculine pride. But, oh, this modern woman….

It was cute, and fluffy and the perfect Christmas read!

At this point, Hoopa is profiling me, so if you’ll excuse me, I think I’m going to go download A Wedding in December, now.

Does anyone else feel super festive at this time of year and read holiday-themed books? Where are my seasonal readers?! What are you reading this holiday season?