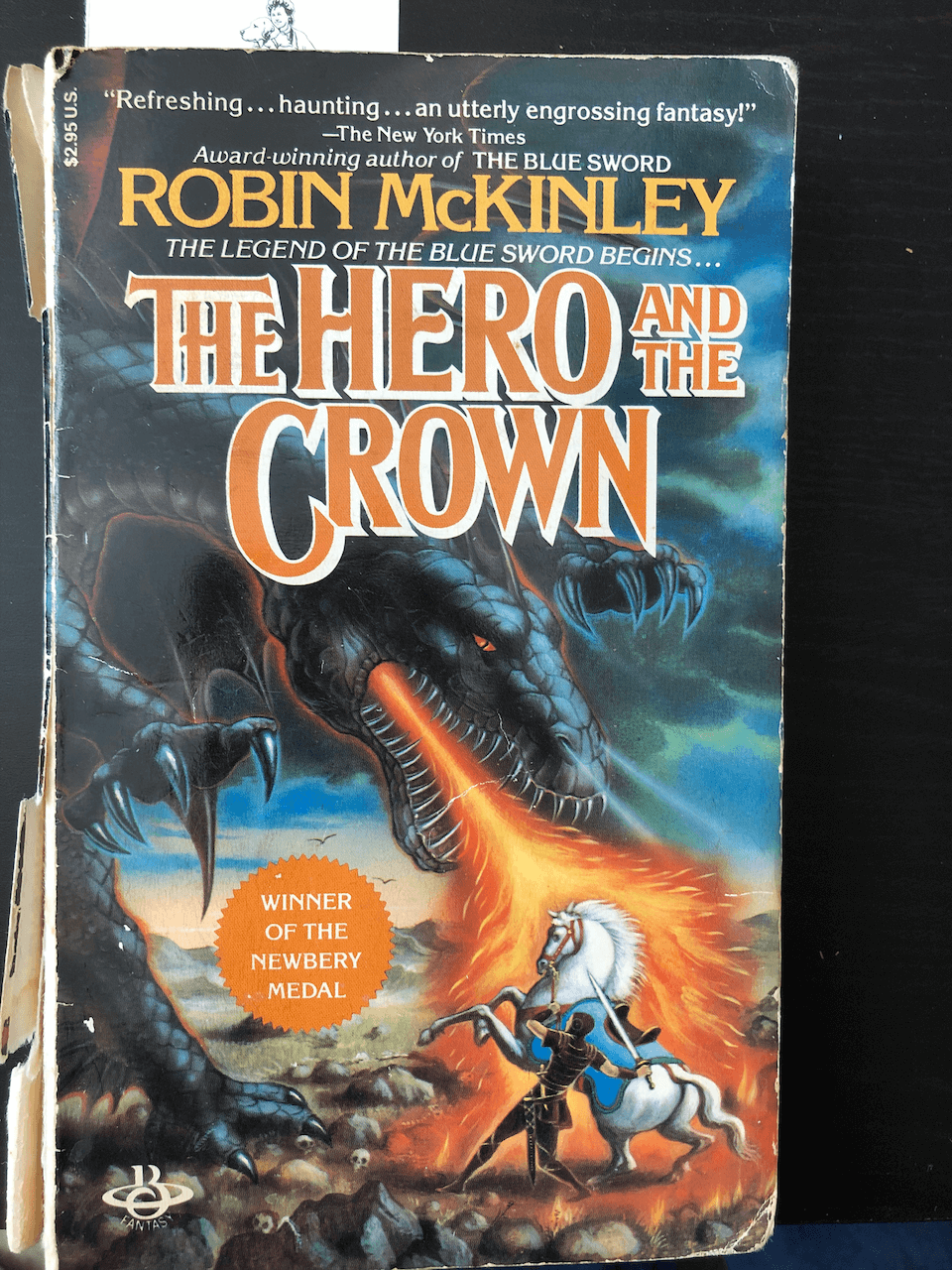 Over the past few weeks, I’ve been introducing my children to one of my favorite books of all time.

No, not Pride and Prejudice — we’ve already done that one. It’s a Newberry Medal winner from the early ’80s called The Hero and the Crown by Robin McKinley. My mother gave me this story when I was about 12 years old, and thus began my lifelong love of stories with strong female protagonists, adventures, swords, wizards, and dragons (or, more accurately, thus continued, as my parents were always big into fantasy and sci fi and we played D&D on many weekends in my childhood). As you can see from the photo, my copy of this book is well-loved—I read it many times as a young adult.

Re-reading it with my kids has been fun, and it’s easy to remember why I loved this book so much. It’s the story of Aerin, the witchwoman’s daughter and also the daughter of a king. Her whole life is about trying to straddle her two worlds, constantly rejected by her father’s court, and without any understanding of her mother’s life as her mother died giving birth to her. She takes up dragon hunting (don’t worry, these dragons are bad), gets hold of an amazing sword (I named my first car after that sword), and engages in a bunch of adventures before she eventually finds her place (or should I say places) in the world.

Aerin is great, but she doesn’t swagger around telling people so. She is persistent, learning much more than others in her position might choose to do. She is stubborn, which sometimes gets her into trouble, but she knows it and realizes it’s a flaw of hers. She is strong, but not so strong that she won’t ask for help, though the ones she gets help from are unusual choices. I love her as a character, and I love this story.

If I had to pick on something I find frustrating about this overall delightful book, it’s that the author uses stilted language, I think on purpose to give you the feeling of being in a bygone era of high kings and courts. I have sometimes found myself editing as I read aloud to make sure the kids understand what a sentence means. However, that’s a small price to pay for a great story.

As an adult, I discovered that this is actually a prequel to a book I’ve never read. Though it was written after, The Hero and the Crown occurs chronologically about 100 years before a book called The Blue Sword, which is about Aerin’s grandson’s grandson. I bet you can guess what’s next on the reading list for my kids and me!

What’s one of your favorite childhood books that you’ve recently re-read? Do you still love it just as much? We’d love to hear more about it in the comments!